Scoring goals is the currency in which all soccer teams deal in and ultimately, success, trophies and winning soccer matches comes down to scoring goals.

Ultimately, all soccer teams and players are judged by their ability to put the ball into the back of the net and having an effective offensive strategy is integral to any side’s success on a soccer field.

The list of the greatest soccer players is often adorned with the same name of influential players that have changed the very way in which the game is played.

From Pele’s incredible goal scoring record through decades of Brazilian success on the international stage and Diego Maradona’s mesmerizing skill with the ball at his feet through to the modern day greats in Lionel Messi and Cristiano Ronaldo, the players that have transformed the landscape of international soccer generally ply their trade-in offensive positions.

Inevitably, over the course of soccer history, the way in which managers, coaches and players have looked to implement offensive tactics has evolved, yet the ultimate aim of strategic innovation is to score as many goals as possible in any given game.

With that in mind, the positions which players adopt on the field can have a huge impact on both the efficacy and success of how a team operates when building attacks and the landscape is constantly changing.

However, in simplistic terms there are 4 main roles adopted by players in a standard soccer offensive team shape:

For strikers, it is all about putting the ball in the back of the net.

Strikers are positioned higher up the pitch than anybody else on their team and are out to get past opposition defenses and be ready to shoot at a goal when the opportunity presents itself.

Regardless of how they operate, they both have exactly the same objective, which is to score as many goals as possible for their team.

In the modern game, the role of the center forward has evolved hugely, with different managers and coaches proffering opinions on how a center forward should go about their work.

Ultimately, the center forward is normally positioned a few yards behind the striker and is tasked with being the link between the midfield unit and the striker(s) looking to put the ball in the back of the net.

Another key facet of a center forward’s role is to score goals too. Whilst they wouldn’t be expecting to score as many as an out-and-out striker in a season, center forwards will also pose a serious threat to opposition defenses.

As the name suggests, the role of an attacking midfielder differs significantly from that of a conventional midfield player.

Attacking midfielders are tasked with being the creative force behind their team’s offensive play and they too link the play from the defense, through the midfield and up to the players operating in offensive areas.

The key hallmarks of a good attacking midfielder are players who are very comfortable on the ball and look to thread passes through to players in front of them.

In addition, attacking midfielders will be very comfortable at carrying the ball and teasing opposition defenses out of position, allowing the strikers and center forwards to exploit any spaces.

Providing width when teams are looking to up their offensive output are wingers, who can operate on either the right or left flanks of the pitch.

Wingers are traditionally part of the midfield set up, meaning they do have to be aware defensively but their primary role is to attack the opposition fullbacks at every opportunity.

Characteristically, wingers will be very happy to run with the ball at their feet, they will have plenty of tricks and skills and are normally some of the fastest players on the team.

Wingers are often a huge service point for strikers too, as they look to carry the ball to the by-line and cross the ball into an area, from which strikers and center forwards can look to shoot at goal.

With such a weight of importance placed on scoring goals in any game of soccer, the formational approach a team adopts in the offensive phase can have a huge impact on the result of the game.

Consequently, managers and coaches are always tweaking their attacking and offensive formations, in an attempt to find the fine margins that may enable them to win the match.

From an offensive perspective, being able to maneuver the opposition defense is the ultimate aim and if an offensive strategy is used to good effect, managers and players alike are often reluctant to change a tried and tested formation that works.

Here is a rundown of some of the most common soccer formations used by teams, when looking to be effective in the offensive phase :

Adopting a 4-4-2 would never be classified as taking an attacking approach but it can provide a team with balance as they look to build up into the offensive phase.

The absence of an attacking midfielder, enables a team to keep an eye on the defensive roles too, with central midfielders prescribed with being able to support their team at both ends of the pitch. 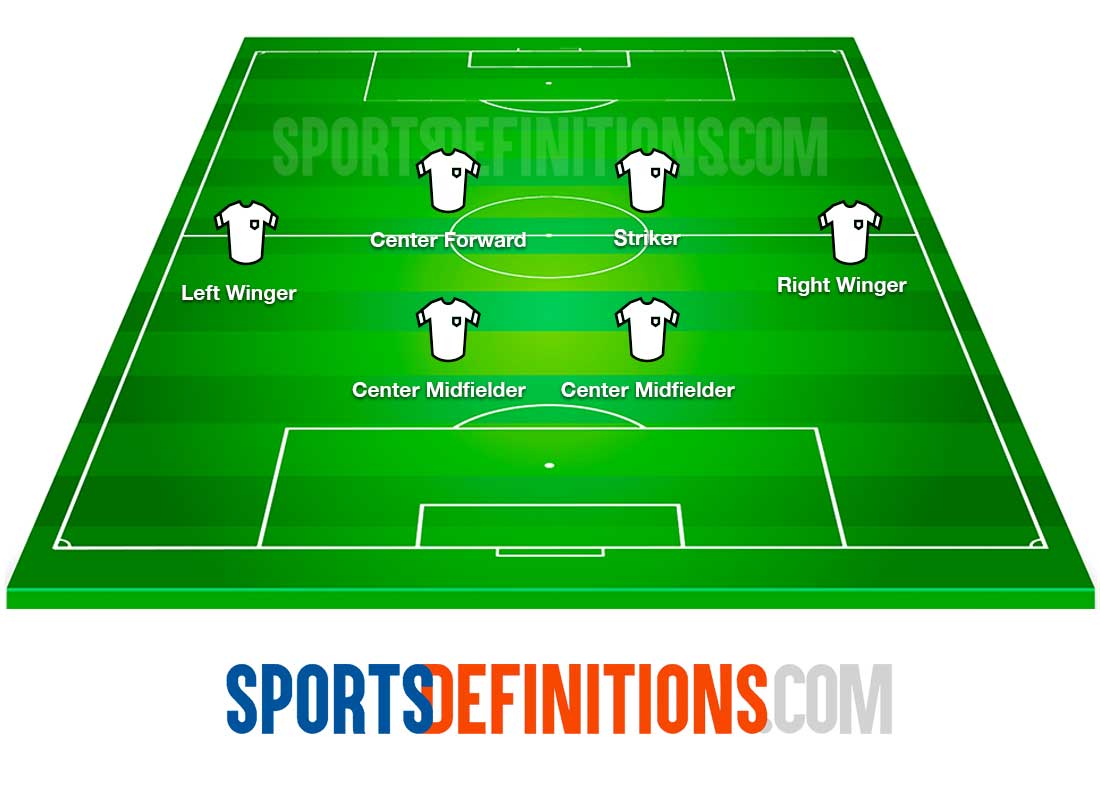 Purely from an aesthetic perspective, 4-4-2 does provide a team with the most balance, as it enables teams to have excellent coverage of the pitch.

When in the offensive phase, the 4-4-2 formation is designed to enable teams to have plenty of possession and to be patient when building up attacks.

The right and left-wingers will be tasked with getting past their opposite numbers in the fullback position and looking to provide width and crosses into the penalty area.

For the center forward, being a target person for the central midfielders and wingers to find is key, looking to link the play together where possible.

Meanwhile, the striker in the 4-4-2 set up will be looking to get on the end of any balls in the box and bang the goals in for their side.

Adding more players to the offensive setup often enables sides to be more potent in attack – which of course can be costly in defense – but can pay dividends if a side needs a goal.

Currently one of the most popular formations in the modern game, 4-3-3 is used to good effect by sides the world over, with managers and coaches seeing the benefit of adding more players to their offensive setup.

The introduction of an attacking midfielder allows a side to have a clear link between offense and defense, ideal for sides who have lots of possession and look to slide passes through opposition defenses.

Whilst the attacking midfielder certainly shouldn’t be avoiding any central midfield battles and tackles, they are in the side to be forward thinking and they will be tasked with finding the wingers and the strikers at every opportunity.

Once again, the wingers will be looking to beat their man and provide width for their side but they will also be expected to carry a serious goal threat, with only one striker on the pitch.

For the striker, the objective is once again simple – to score goals – and using their pace and/or physicality will be integral, as they look to occupy both center backs in the opposition defense.

When things are looking desperate, 4-2-4 is the formation many managers and coaches turn to as they look to score goals and score them immediately.

Versatility is key in a 4-2-4 formation, as the urgency behind scoring a goal is at fever pitch for the side on the offensive.

Wingers are integral in the 4-2-4 set up, as they need to keep their width to enable those players around them to operate in the central areas and stretching the play can also tire opposition defenses.

For the center forwards/strikers, providing a constant goal threat is key and if strike partnerships are able to link up effectively, it can be very difficult for opposition defenses to deal with.

Adopting a 4-2-4 formation is often very high risk for sides but if used effectively, it can pay off when looking to score goals.

Putting the ball in the back of the net is the ultimate objective for any side and having an efficient offensive tactical formation and strategy will enable sides to be more creative in the final third, which in turn should present more goal scoring opportunities.