Basketball fans, and indeed any casual spectators of the sport, can be forgiven for thinking that the players on the court are making the most of a combination of different natural quirks.

Tall, lean bodies, with long legs, along with a bigger-than-average arm reach, would all seem to confer players an advantage, while – although basketball is technically a non-contact sport – a good level of physical strength can also be expected to have a bearing on a player’s suitability to excel at the sport.

But a factor that’s often unfairly overlooked is the size of a basketball player’s hands. And when it comes to this stat, the legendary Shaqille O’Neal is generally taken as the benchmark against whom all others are gauged. However, we need to point out that, in Shaq’s playing days, hand size wasn’t routinely mentioned in the official figures as it is today, so no one ever actually ran the rule over his hands. They are estimated at 10.25 inches long and 12 inches wide, however – which gives some perspective to the figures we quote elsewhere in this article.

His hands haven’t been measured for the records, but given that we do know that his boots were size 22s, there’s little reason to doubt that the above figures were close to the mark.

Whilst the figures are unofficial, it’s estimated that the largest hands currently in the season belong to Boban Marjanovic.

The standard way to measure a player’s hand size is from the base of their palm in a straight line to the tip of the middle finger. Players’ hand width is also taken as an official statistic, and this is the length between the tip of their thumb to the very end of their little finger, while the hand is being held outstretched.

Hand sizes were first recognized as an official stat in 2010, when the measurement was taken for all players involved in the draft for that season. In doing so, the game’s officials found that a basketball player’s hands could be as much as 10 inches (25.4 centimetres) long. By contrast the average man’s hand is 7.4 inches (18.8cm) long. 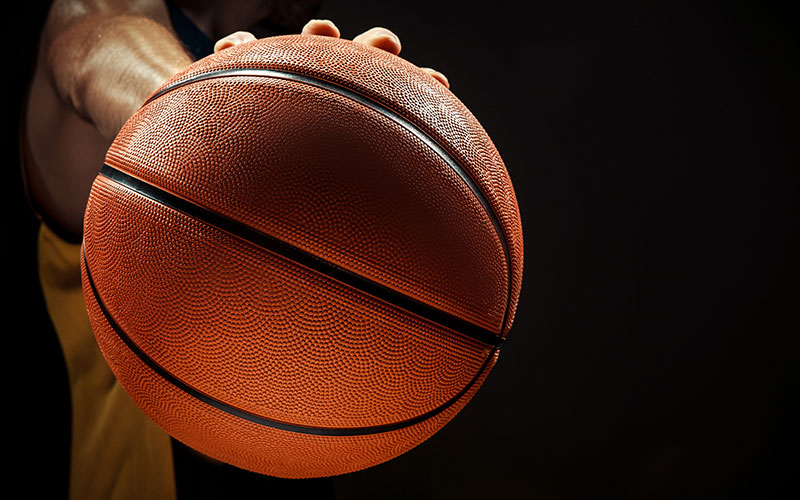 When Are Big Hands An Advantage In Basketball?

As an offensive player, you’re more likely to be able to gather the ball first-time when it is passed to you, and be able to either stand still, or to start to dribble, and keep the ball under control at all times as you do so.

From a defensive point of view, large hands could be the difference in allowing a player to be the first to reach rebounds as the ball comes back into the court from the backboard, as well as swiping the ball from an opponent while they don’t have it under full control or are bouncing it.

It’s a different matter when it comes to scoring points. Here, it’s the strength a player has in their fingertips, rather than any measure of size, which is likely to make them a better shooter.

So What’s The Tale Of The Tape? Who Has Basketball’s Biggest Hands?

We have two sets of stats here – one covering players currently active in the NBA, and another which highlights the biggest-handed players from basketball history.

On top of the former list (unofficially) is Boban Marjanovic. Formerly of the San Antonio Spurs, Detroit Pistons and Los Angeles Clippers, as of 2019-20 he was with the Dallas Mavericks, and also represents the Serbian national basketball team. The second-tallest player currently active in the NBL, while Marjanovic comes from a nation known to have a fair proportion of taller-than-average men, height isn’t especially in his genes – his father is only 5ft 9ins (1.75m) tall.

Pushing Marjanovic and Shaq close is Giannis Antetokounmpo, who has 9.9-inch long hands which are 12 inches wide. The Milwaukee Bucks player has been nicknamed – somewhat unkindly – The Greek Freak. He just fails to hit the 7ft mark by one inch. Nevertheless, he has a string of all-star team appearances to his name, and in 2020 became only the third NBA player in history to win back-to-back Most Valuable Player (MVP) awards.

Our third highlighted player is the first who plays outside America, Noah Vonleh being on the books of the Shanghai Sharks in China’s top league, the CBA. The much-travelled Vonieh has had spells with the Chicago Bulls, New York Knicks and Denver Nuggets, and has 9.75-inch long and 11.75-inch wide paws.

The final player to sport 9.75-inch hands is Kawhi ‘The Klaw’ Leonard. Officially a small forward with the Toronto Raptors, ‘The Klaw’ far from lives up to his position, exceeding two metres in height. First entering the NBA draft in 2011, he was MVP for the NBA championship-winning San Antonio Spurs in 2014, and repeated the feat in 2019 when he was part of the first Toronto Raptors team to become NBA champions in the franchise era.

Who Are The Basketball Players With The Biggest Hands From Previous Eras?

Those who merit a mention in this category include Julius ‘Dr. J’ Erving, who used his outsized hands to great effect as one of the best ball dunkers in history. He combined a 9.5in long and 11.75in wide hand with great arm speed, to bamboozle many of his opponents.

Connie Hawkins had a relatively short NBA career, playing for the Phoenix Suns, LA Lakers and Atlanta Hawks between 1969 and 1976 – making four appearances in the All-Star team – but had previously made his mark in the American Basketball Association league. His hands were, unusually, almost square, at 10.5 inches long and 11 inches wide.

Of course, no list of basketball superlatives is complete without mention of Michael Jordan. His 15-year NBA career saw him bring the league to worldwide attention thanks to his prolific scoring feats that earned him a career match scoring average of 30.12 points, which grew to 33.45 in play-offs, showing that he was a player for the big occasions.

This article does not pretend to give a definitive list of the players with the biggest hands in the NBA, but we hope it shines a spotlight on some of slightly lesser-known players from previous eras who maximized the advantage in hand size that nature had given them.