Tennis balls can indeed expire, and can do so fairly quickly depending on how much they are used. 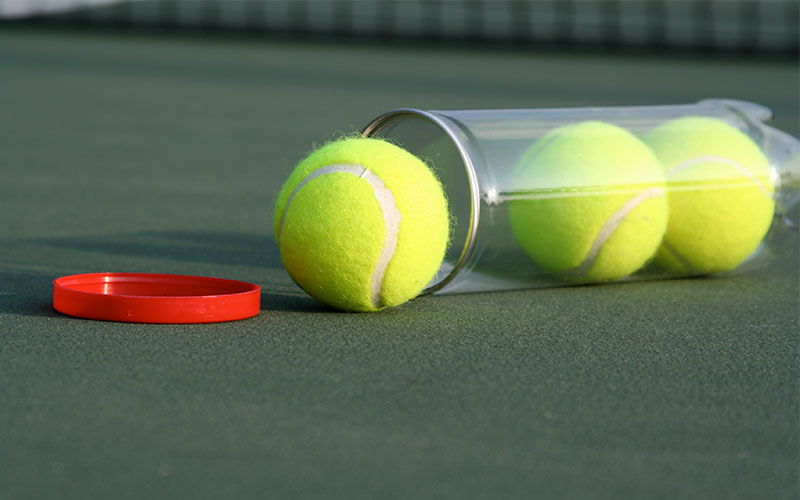 Why do Tennis Balls Expire?

An expired tennis ball refers mainly to a tennis ball that has lost some of its pressure, but can also refer to a ball that is scuffed, damaged, or plays differently than intended to.

Expired tennis balls are ones that have lost their pressurisation because the air has leaked out of the ball slowly over time. This can happen in a variety of different ways, but the most common way in which a tennis ball will lose pressure is simply by being played. This leakage happens at a molecular level, as the rubber encasing the ball cannot simply contain the particles securely indefinitely, thus causing a leakage (albeit, a slow one).

How Can I Tell If My Tennis Balls Have Expired?

Tennis balls can expire based on their usage, but can also degrade naturally over time. Whilst you can sometimes tell that your tennis balls have expired based on appearance, that isn’t always the case.

One of the easiest ways to check if your tennis balls have expired is by giving them a squeeze in the palm of your hand. If the tennis ball feels like it gives too easily, it’s likely that it has expired. As a rule of thumb, you shouldn’t be able to pinch both sides of the tennis ball together either.

Whilst tennis balls are stored in pressurized cans to decrease their likelihood of expiring, they can expire after extended periods of time, regardless of whether they’re in an unopened tube or not. It can take around two years for an unopened can of tennis balls to expire, and that is mostly due to the miniscule holes in the packaging which can decrease the essential pressure within the can. Two years is a long time, however, and if you intend on playing tennis regularly you’ll be replacing your tennis balls fairly frequently.

How to Keep Tennis Balls Fresh

The aforementioned method of keeping unopened tennis balls in their tube may be a fruitless endeavor, but it will keep tennis balls fresh for over a year. There is really no way to keep tennis balls completely fresh for an indefinite amount of time. You can maximise your tennis ball’s lifetime by, ironically, not playing tennis frequently. A can of fresh tennis balls should only be opened when you’re about to play, to ensure that they retain their pressure for as long as possible.

However, the condition of your tennis balls shouldn’t matter too much if you’re playing recreationally, unless they’re genuinely affecting your performance.

Why are Tennis Balls Pressurized?

What are Pressureless Tennis Balls?

Pressureless tennis balls are exactly what they say on the tin. Their cores are designed differently to enable them to last longer, and to ease the minds of those who are cautious of their tennis ball’s pressure.

Pressureless tennis balls are ideal for beginners or people who play tennis casually as they’re a more cost-effective alternative to pressurized tennis balls.

How Often are Tennis Balls Replaced?

Professionally, pressurized tennis balls see about 1-3 hours of gameplay before they are replaced. This is to ensure that the quality of the tennis balls remain high throughout the match or tournament.

On the contrary, pressurized tennis balls may be replaced after 1-4 weeks of casual play. It’s speculated that a tennis ball will go bad after two weeks, but constant professional play can speed the expiry process up, and the casual nature of recreational play means that the exact condition of the tennis ball isn’t monitored as closely as a professional player would like it monitored.