There is a huge possibility that you might’ve noticed soccer players wearing some sort of a bra-like feature beneath their shirt over the past decade or so. Even though there are many clubs, and especially players who are competing with each other about who has the best look, wearing a sports-bra kind of equipment is everything but a fashion statement.

Technological advances have not only improved the quality of sportswear but fitness monitoring as well. As we’ve been witnesses to many different life-threatening scenarios both on and off the pitch, having a performance tracker is a necessity these days. This is what you see when a soccer player removes their shirt to reveal the bra-like piece of clothing.

So, what is this performance tracker?

A performance tracker is a device that has a bit more complex electrical components than you might expect. The tracker is equipped with a GPS and several other fitness measuring instruments. The whole idea is to have players wear these both during training sessions and during the games. The analytics team that analyzes the data then has all the necessary info on which players are fit, which are currently struggling with their form, or if there are any potential career- or even life-threatening scenarios.

Performance trackers were first introduced to English soccer around 10 years ago when the fans could see that a huge number of players all of a sudden have hunchbacks. Their development started even before that, but soccer fans all around the world could see this newly introduced piece of technology in official games for the first time. 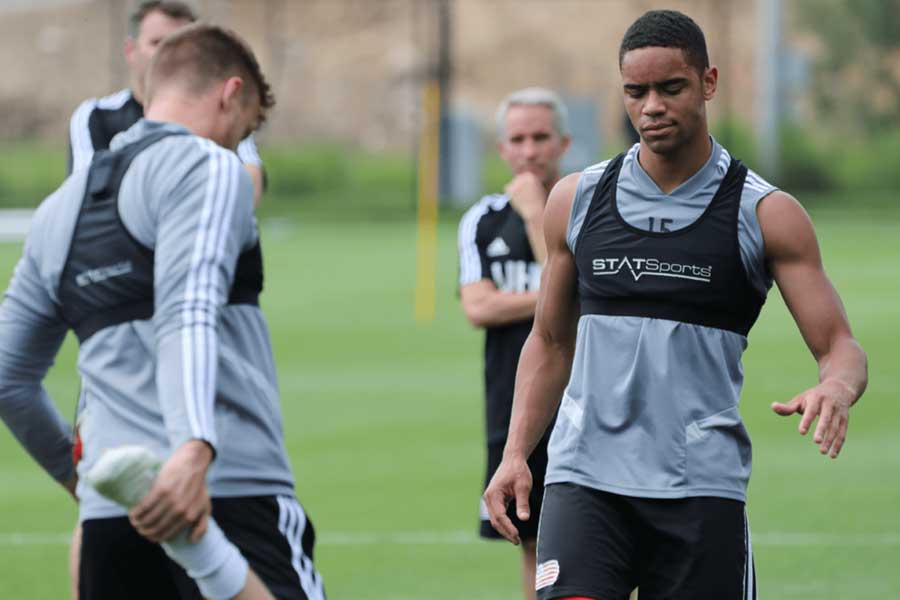 What do they do and how do they work?

One of the main reasons why a team would require their players to wear performance trackers is quite simple – tracking & strategy. As much as in-depth analytics have developed over the years, sports equipment technology has seen a huge rise in complexity as well. One of the byproducts of having an advantage against the opposition is having on-field data that could improve the team’s performance.

The reason why the engineers decided to go with a tracker placed inside a sports-bra looking kind of feature is to avoid potential injuries. While the data gathering is vital in today’s game, it’s also quite important not to cause potential new injuries by having players wear the trackers on their wrists, like watches, for example. The injury risk would be a bit higher in that case, since soccer is quite a physical sport – especially when players are fighting for position. Having them placed inside the players’ boots is also not quite productive, since the data gathering would, in that case, be quite limited.

If we compare regular smart or GPS watches with the performance tracker that the players wear, we will notice that they are better in the majority of aspects, if not all. While a regular GPS watch records at 1 Hertz, performance trackers can do the same work at the rate of up to 10 Hertz. Having this allows the team to strategize even better since the analytics can now have a much clearer picture of the players’ positioning all over the field.

Since some of the most important values that performance trackers measure are speed, acceleration, hear-rate, and distance covered, we will try to give a more detailed explanation for each one.

One of the fastest players in the English Premier League is Heung Min Son who plays for Tottenham Hotspur. Even though he can outrun most of the opposition, he has the potential to be even faster. How so?

The coaching staff and the analysts can use the data recovered from the performance tracker to create training sessions that would benefit both his top speed and his game quite a lot. After creating the special program according to his ability, the development could then be easily noticed and tracked on the tracker.

Having a player with the ability to develop very high top speed is not quite the same as having a player who has a strong acceleration ability. This skill is quite important for wide players, like wingers.

Since the majority of fast players have tasks of moving the ball around the field quickly, they also tend to do overlapping runs. While doing so, they are trying their best to run behind the enemy lines.

A reason while it’s useful to track acceleration is, among other reasons, being able to see if an injured player who recovered is now fully fit. The coaching staff can now easily track his performance on the pitch and see if the player will now make a full recovery and be as fit as before the injury.

The reason while it’s so easy to track performance and see how much a player has run during a game even as an average fan with little knowledge about soccer is because of the vests. The vest is equipped with an accurate tracking device that relies entirely on GPS.

This information is not only useful for commentators who are talking about the stats throughout the game, but also for the coach who can now understand what is happening on the field more accurately.

When this information is used in real-time, it doesn’t only help commentators give you useful stats about the game. It also helps the coach to understand what is happening on the field more accurately.

Performance trackers can allow everyone off the pitch to see if a player with a certain role is doing what they’re supposed to do. In some cases, it might seem like some players are a bit “lazy”, but the vests let the coaching team know if that is the case or not.

Measuring the heart rate of a player on the field is one of the most vital aspects of a performance tracker. This information allows the coaching staff to see how had a player is working and shows where and when they should put in some extra work.

If a player is showing signs of unusual fatigue at certain parts of a game, the staff will in that case structure the player’s next training session with more focus on aspects other than cardio so the player can be fully fit in the next game, where his vitals will again be monitored.

In some cases, measuring heart rate is a good way of preventing players with undetected heart issues from collapsing on the field.

As we’ve mentioned, as much as a performance tracker is beneficial for strategic reasons, preventing possible life-threatening issues is maybe even more significant.

Technological advances have let people involved in soccer hugely improve the sport in recent history. Soccer is now almost incomparable to what the fans were able to see only a few decades ago.

Performance trackers are a good investment that every professional soccer club should focus part of its finances on.