Soccer is the most popular sport in the world. It has fans in all corners of the planet. Billions of people love soccer, and the soccer ball has brought joy to them on many occasions. The simple image of a black and white soccer ball can make a soccer fan smile, reminding him of all the fun times he had playing with it or watching it on TV.

The reason why soccer balls are black and white is to make them easier to see on a black and white television screen. In the 21st century, this might seem odd to many, but let’s get a deeper dive into the reasons for this being the case. 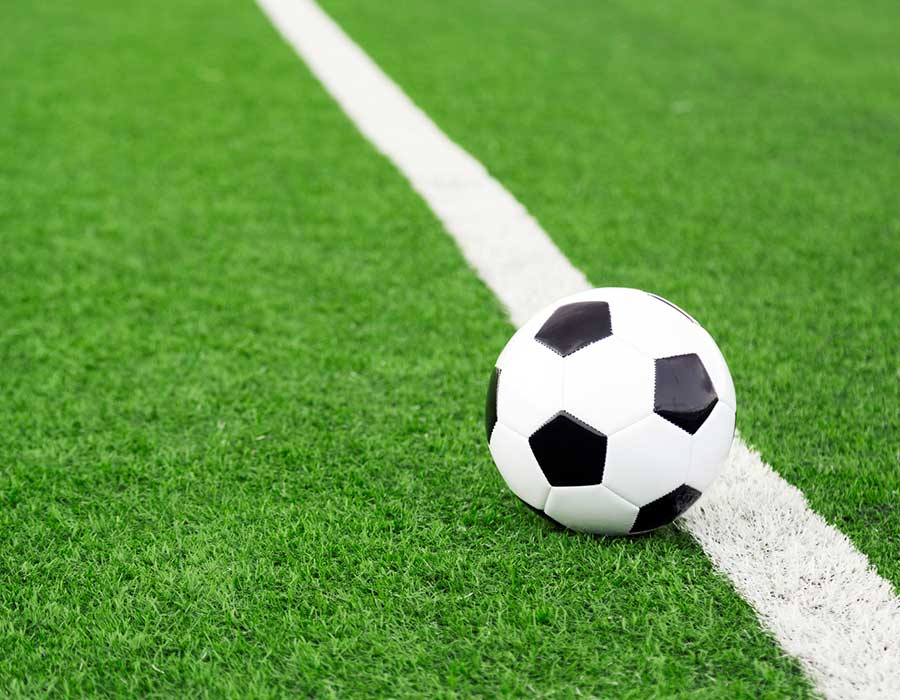 When soccer was invented, the color of the ball was never significant. The bigger question was what was the ball going to be made of. In the second half of the 19th century, there were no standardized soccer balls, and they often had a much shorter life span.

But deep into the 20th-century, things have changed. The first full soccer game in history to be broadcast live on TV was the FA Cup final in 1938 in England. Preston North End played Huddersfield on April 30 and since then and all the way to the 1970s, TV sets most often used were black and white.

Watching football on black and white screens had its difficulties. For example, seeing the ball clearly. The first soccer balls used were usually made of brown leather. They were thus hard to track on a black and white TV screen, as the images were often blurry and grainy. To get the feeling of it, just take a look at this soccer match in black and white, at the time when the ball was single-colored brown:

But then something influential happened. The famous Adidas company decided they will make a black and white soccer ball for the 1970 FIFA World Cup in Mexico. Their move changed the history of soccer.

The reason? The fans all around the globe could now have a much easier time tracking a black and white ball with a clear contrast of colors.

When Was The First Black and White Soccer Ball Introduced?

The first black and white soccer ball was used at the 1970 FIFA World Cup in Mexico. It was for this tournament that Adidas introduced their iconic Telstar soccer ball.

Adidas were the company responsible for making the official game ball for the tournament and they made one specifically for making it easier to follow on a black and white TV set.

The Adidas Telstar soccer ball was a huge success. It had a clear contrast between the two colors, every fan could follow it easier on TV, and it became something the fans and teams talked about during the tournament.

Such a black and white ball became synonymous with all soccer balls, even though before the 1970 World Cup, the ball’s color was never discussed so much.

How Is The Black and White Soccer Ball Designed?

But just because a soccer ball was black and white, that did not mean there were no precise rules to how it should look. Because there was a clear pattern used to define how these now black and white soccer balls should be designed.

The original black and white soccer balls were made of leather hexagons and pentagons. They were hand-stitched, with every pentagon being surrounded by hexagons on all five of its sides. The pentagons were painted black, while the more numerous hexagons were white.

In total, there were 32 panels on a black and white soccer ball – 20 panels were white hexagons, while the remaining 12 were black pentagons.

Why Were Pentagons and Hexagons Used For A Soccer Ball?

The reason why a soccer ball was made up of pentagons and hexagons was that this specific combination of shapes is what creates an almost perfect shape for a soccer ball. Such a shape is called a spherical polyhedron or a truncated icosahedron.

While these big words are unfamiliar to casual soccer fans, these designs make the ball much better than its previous iterations. Earlier soccer balls were not so ideally round due to a worse choice of 18 leather panels usually used to stitch a ball.

Who Invented This Design For A Soccer Ball?

There is no consensus on who invented the 32-panel design for a soccer ball. Some sources claim it was Richard Buckminster Fuller, others suggest it was Eigil Nielson who made it possible. Some even go so far as to say that the ancient Greek mathematician and physicist Archimedes did it.

But that is not what matters to most soccer fans. This idea peaked in 1970 when Adidas put together the Telstar soccer ball, making its design virtually a template for how all soccer balls should look for years to come.

How Soccer Balls Evolved Through History?

Soccer balls have evolved massively since the invention of the sport. Back in the old days – and we are talking 19th century here – soccer balls were made in many different ways.

One of the most common methods to make the ball was to use an inflated pig bladder. It was usually wrapped in leather. Another way to make a ball was to stuff feathers in a ball made from animal skin. Some even had leather-covered wine bottles, which were filled with cork shavings.

But then everything started changing. In 1884, Charles Goodyear patented vulcanized rubber. This paved the way for the creation of the first rubber soccer balls 11 years later.

In 1862, Englishman H.J. Lindon manufactured the first inflatable soccer ball. This ball had a rubber bladder which made it much easier for players – the ball could keep its shape and was better when kicking it.

All the way through the first half of the 20th century, most balls were made of leather, which made them heavy when it rained. Slowly things started to change. In 1951, all soccer balls were dyed fully white, and some ten years later, synthetic materials were put to use.

The soccer balls made of synthetic materials could last longer, were better at retaining their shape and didn’t hurt as much when players would hit them with their heads. But in the 1960s and 1970s, things started changing rapidly.

How Are Modern-Day Soccer Balls Designed?

Modern soccer balls don’t always follow the pattern of 32 hexagonal and pentagonal shapes. For the 2006 FIFA World Cup in Germany, Adidas for the first time started using curved plates. The ball famously named ‘Teamgeist’ was created out of just 14 of these plates, making it rounder and necessitating less stitching. Here is how the look and design of the official World Cup soccer ball has changed since 1930 to 2018:

Now soccer balls vary in colors and patterns used to make them as perfectly spherical as possible. The UEFA Champions League soccer balls are famous for their five-pointed stars design across the entire ball, mimicking the competition’s logo.

But nevertheless, when you ask someone to picture a soccer ball, they will most probably see a black and white one in front of their eyes.