A strategy used for quite a bit has had its rise and fall over time. Popularized mainly by Manchester City’s Pep Guardiola, Tiki-Taka soccer is seen as one of the most significant advancements in the sport over the past 15 years. A strategy so unique, yet somewhat widespread that it became synonymous with several coaches and clubs.

Why is it so popular and effective?

In short, Tiki-Taka is a tactic that utilizes short and quick passes. The main goal here is to keep the possession and press hard when the opposition has the ball. By doing so, your team will not only be able to constantly attack but will also control the midfield and movement of the opposition.

The term Tiki-Taka was first coined in the mid-2000s by the legendary Spanish coach Javier Clemente and later on popularized by Spanish commentator Andres Montes. Tiki-Taka could be roughly translated as light, quick steps. Even if you’re not a huge soccer enthusiast but speak Spanish, you might get the idea of what this style of soccer is all about.

Manchester City has also popularized this strategy in the English Premier League with the arrival of Pep Guardiola in 2016. Even though Pep hasn’t been using exactly the same Tiki-Taka strategy as he was during his time and Bayern and Barcelona, the fundamentals are there. City has been playing without a proper striker for quite some time now, and the role of false nine is currently occupied by Gabriel Jesus.

The father of Tiki-Taka before it was known as Tiki-Taka was none other than Johan Cruyff. The Dutch soccer player and manager was not only a top-tier player but also a manager. Cruyff is considered the person who perfected “Total Football” (or “Total Soccer”). Just like Pep Guardiola, Cruyff was also fixated on possession and creating space with slow build-ups. That was almost 40 years ago.

Since he was both a part of Ajax and the Netherlands national team, Cruyff was exposed to a more technical side of soccer throughout most of his career.

So, what does a Tiki-Taka strategy look like on the field?

Almost every single Tiki-Taka squad always has a false nine playing upfront. In short, a false nine is a striker who acts more like a midfielder that goes deep into his own half to start the attacking phase.

A good false nine has to be both a clinical finisher and a creative playmaker. A good example of a false nine would be Lionel Messi. Messi was a focal point of Guardiola’s era at Camp Nou.

The most popular formation for this style of play is 433. In 433, the false nine is positioned in between the front three players. What separates a false nine from regular nines is the movement and their position on the field.

As we’ve mentioned, a false nine will usually move all the way down to the midfield (in this case, the mid-three in 433) and will start the attacking phase there. By doing so, the false nine crowds the midfield and leaves many different options for both the wingers and the rest of the team. 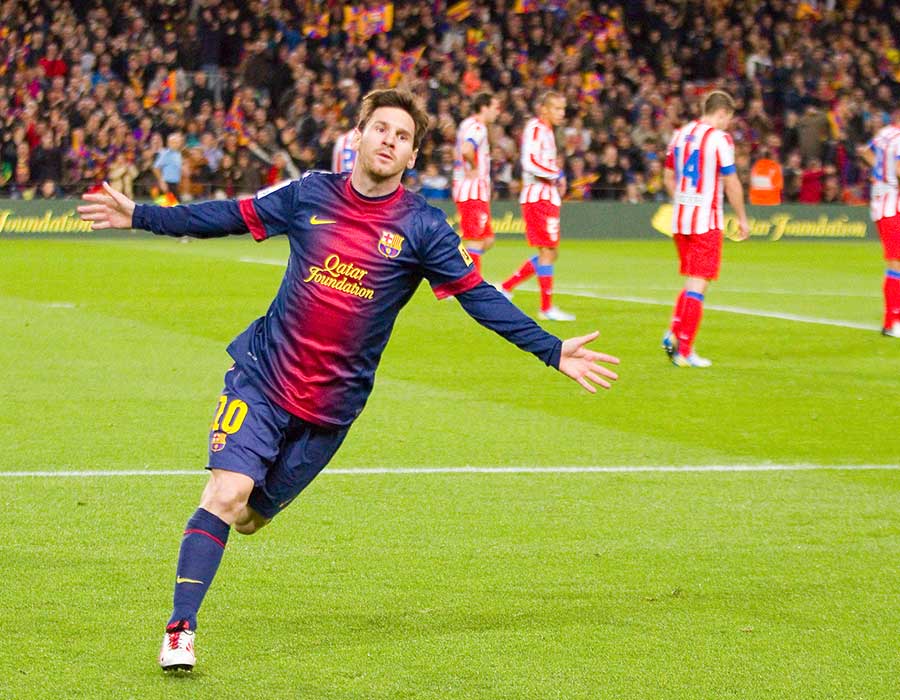 An example of what that looked like would be Pep’s 2010/11 Barcelona squad. The main players in this era were the aforementioned Messi, Xavi, Iniesta, Villa, Pedro, and Busquets. Busquets, the holding midfielder, had the task of being the first line of defense. His physical ability let him dominate the midfield, recover possession and pass the ball to either Xavi or Iniesta.

From that point on, Messi would now already be moving down to the midfield to start the attacking phase. At this moment, the ball would be in either Xavi’s or Iniesta’s possession, depending on the opposing setup and the amount of pressing provided by the other team.

Barcelona would now attack with five players – Xavi, Iniesta, Messi, Villa, and Pedro, with both Busquets and fullbacks providing some assistance. By crowding the midfield and attacking with more than the usual 3-4 players, Pep’s team would now have space to create various chances. Villa and Pedro were quite pacy and agile at the time. They would give the opposition a hard time by making runs and creating pockets of space that could easily be used to Barca’s advantage.

By having some of the best passers the sport has ever seen, Barca was able to easily create triangles and move the ball forward but also keep possession in case there was not enough space to make progress.

An example of a triangle on the left side would be between Pedro, Messi, and Iniesta. The winger, in this case, Pedro, would be the widest player of the bunch. Messi would be positioned a bit more to the right but still be in the center, while Iniesta would complete the triangle by being on the bottom left side of the opposition’s final third.

Barca could then just wait for the opposition’s movement and gradually make progress by constantly passing to each other. If the opportunity arose, one of the three would make a run (usually Pedro or Messi), which would frequently disrupt the defense since the rest of Barca’s team would confuse the opposition with their constant runs into the area.

Is there another formation besides 433 that uses Tiki-Taka?

As much as 433 is the go-to formation for this strategy, there are some exceptions. The second most popular Tiki-Taka formation would be 4231. Instead of having three players in the midfield, depending on the instructions, a team can now have at least four, if not five centrally-oriented players.

In 4231, the CAM (central attacking midfielder) acts as a false nine. The striker can now focus on other tasks, like moving horizontally across the field to open up some more space and create a passing opportunity for the teammates in the midfield.

The current state of Tiki-Taka soccer

Many would argue that the downfall of the popularity and the effectiveness of this strategy has been gradually falling down ever since the mid-2010s. With the arrival of Antonio Conte to Chelsea in 2016 (the same year Pep Guardiola came to Manchester City), the revival of the 3-at-the-back formation has transformed modern soccer as we know it quite a bit.

Conte’s soccer philosophy is based on overloading certain areas of the field. With his 343 strategy, Conte tends to utilize his wingbacks quite a bit. That way, the team attacks and defends with seven players at the same time. That means that both the wingbacks, midfielders, and attackers are a part of the attacking phase, and the only three players who are behind are the three centre-backs.

Guardiola has also managed to not only adapt to but also improve this strategy. Even though Manchester City usually plays with four defenders, fullbacks are still a vital part of both phases. That’s why fullbacks are powerhouses of modern soccer.

Possession and pressure-based soccer is still a vital strategy for many coaches inspired by the Spanish school of soccer. However, we will most likely not see an early 2010s Barcelona revival any time soon.

The effectiveness of traditional Tiki-Taka soccer has diminished over the past couple of seasons. Many coaches have found a way to withstand the pressure this type of possession-based soccer makes. We’ve seen some variations of the strategy, mostly among coaches who have been using it for years but had to adapt to modern standards.

We can still see that the influence of this type of soccer is present in the top-tier clubs over the world.

Over the next couple of decades, we will probably see a huge number of young coaches who will most likely cite Pep Guardiola, Javier Clemente, and Vicente del Bosque, among many, as their main influences.

As Pep Guardiola would say – “Move the Opponent, not the Ball”.