Lionel Messi is one of the best players in the history of soccer. He is also one of the most famous soccer players in the world. Messi is known for his incredible goal-scoring prowess, playmaking skills and ability to beat teams almost by himself. Throughout his trophy-laden career, he has been described as a calm player. That is why many people are curious as to how many red cards such a cool and level-headed player has received.

Messi has a total of 3 red cards in his career. During his career, he has played over 950 competitive soccer games. Yet, he has received just 3 red cards during those games, getting sent off from a soccer match. 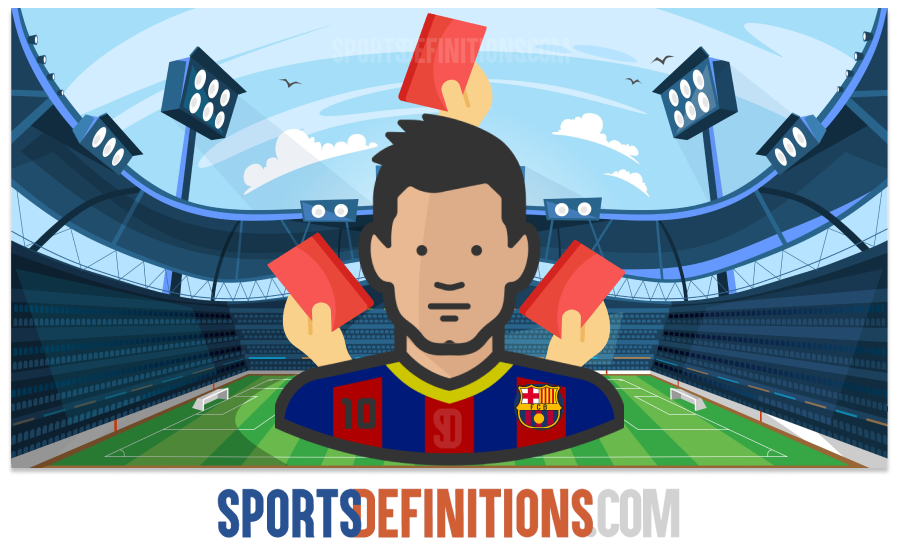 Lionel Messi is a player who rarely gets in problems on the pitch, which is why it was a surprise to see how he got his three red cards. All of his ejections were straight red cards, meaning they were for more serious offenses. Those red cards were not usual for his character. Two of the red cards were deemed controversial sending-offs at the time, with Messi’s fans believing he didn’t deserve to receive them.

Here is how Messi got red cards in his career:

Lionel Messi got his first red card in his first game for Argentina.

Messi earned the red card on his national team debut, on August 15, 2005. It happened in an international friendly match against Hungary.

Messi was 18 years old. His dream came true to play for Argentina, but things did not go as planned. After 63 minutes, Messi came on as a substitute, replacing his teammate Lisandro Lopez. However, he was sent off just one minute after entering the field.

When Messi got the ball after coming on, Hungarian Vilmos Vanczak was making a foul play, pulling him back for his jersey. With Messi trying to break free, he hit his opponent with his elbow, catching the player by the face. The Hungarian player fell theatrically, helping the referee make the decision.

Messi protested the call after the game, claiming he was only trying to set himself free from the opponent’s grip, but this was not how the referee saw the incident.

It was a terrible international debut for a young Lionel Messi, who was already a famous youngster at FC Barcelona. He was looked upon as the next great thing in world soccer. Reportedly, Messi cried in the locker room after getting sent off. 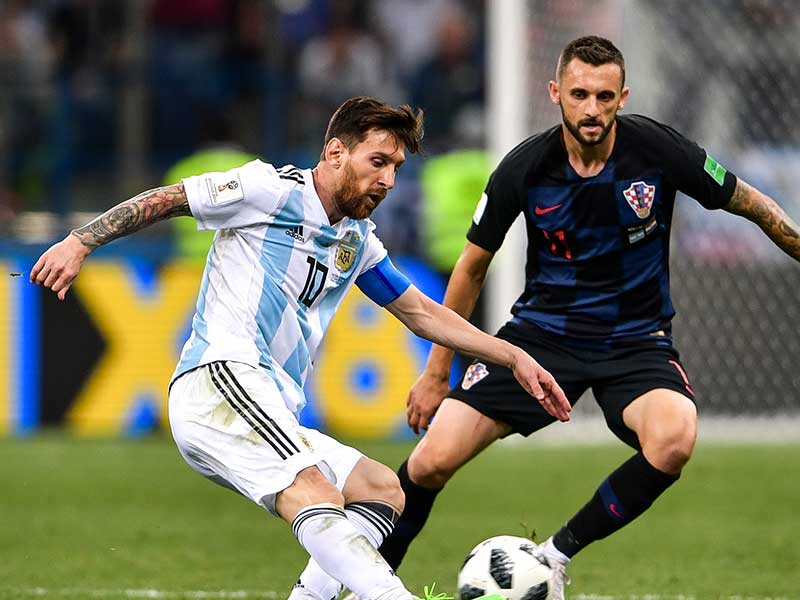 Messi’s second red card happened 14 years after his first one, in 2019.

This occurred while Messi was once again playing for Argentina. It was the third-place playoff at the Copa America in Brazil. On July 6, in São Paulo, Argentina defeated Chile, but both teams ended the match with 10 players.

After 36 minutes, Argentina had a 2-0 lead, when Messi decided to chase the ball which was going towards goal-kick. Chile defender Gary Medel tried to stop Messi from getting the ball before it went out of bounds and the two of them collided. Messi and Medel started an incident by bumping into each other. That is normal among soccer players, but it was not for Messi and his calm temper.

The referee rushed to stop the play and showed the red card to Messi and Medel. Players from both teams tried to calm things down, but the referee had already made the decision. The referee also asked for a VAR check, with the review only confirming his initial decision.

Argentina won the game against Chile 2-1, winning third place in the 2019 Copa America. For his red card, Messi got a one-match suspension but his behavior was also the reason for CONMEBOL – the South American soccer confederation and Copa America organizers – to punish him with a $1,500 fine.

But this was not the end of the story. After the match had ended, Messi made highly controversial comments in the media. They were also unexpected – Messi has been known for rarely complaining to the journalists, after all.

Argentina’s number 10 said that ‘there is no doubt, the whole thing is set up for Brazil’, talking about the tournament. Messi went on to say that ‘I did not want to be part of this corruption, we shouldn’t have to be part of this disrespect we suffered during the Copa America’. Because of those comments, Messi received a three-month ban from CONMEBOL.

Messi’s allegations of corruption within the governing organization meant he had to pay a further $50,000 fine. He missed the next four Argentina games – friendly matches against Chile, Mexico, Germany and Ecuador.

Lionel Messi got his third red card in 2021 playing for Barcelona. That was his first-ever red card at the club level, in his 753rd game for Barcelona.

The sending off of the Argentine star happened on January 17, 2021, when Barcelona faced Athletic Club from Bilbao in the Spanish Supercup final in Seville. The Catalan club lost the game 3-2 after extra time and it was exactly at the end of the added 30 minutes that the incident occurred.

Messi earned his red card after foul play on Asier Villalibre in the 121st minute. He passed the ball to the left flank when he bumped into the Athletic Club player. That irritated Messi, who was nervous because his team was losing, and he hit the opponent to make him fall to the ground.

This incident at first did not make the referee show Messi a straight red card, but the fourth official alerted him of the on-field incident. The referee went on to make a VAR review. After looking at the replay of the incident, the referee decided to send Messi off in the final minutes of the Supercup final.

Because it was a straight red card, Messi was eligible for getting a longer fine, which he did, serving a two-match ban. Ultimately, Messi missed the Copa del Rey match against Cornella and the LaLiga match against Elche.

This incident was less controversial than Messi’s previous two red cards, but it was still an unusual show of lost temper when his team was in a losing position. Athletic Club ultimately won the Spanish Supercup trophy. 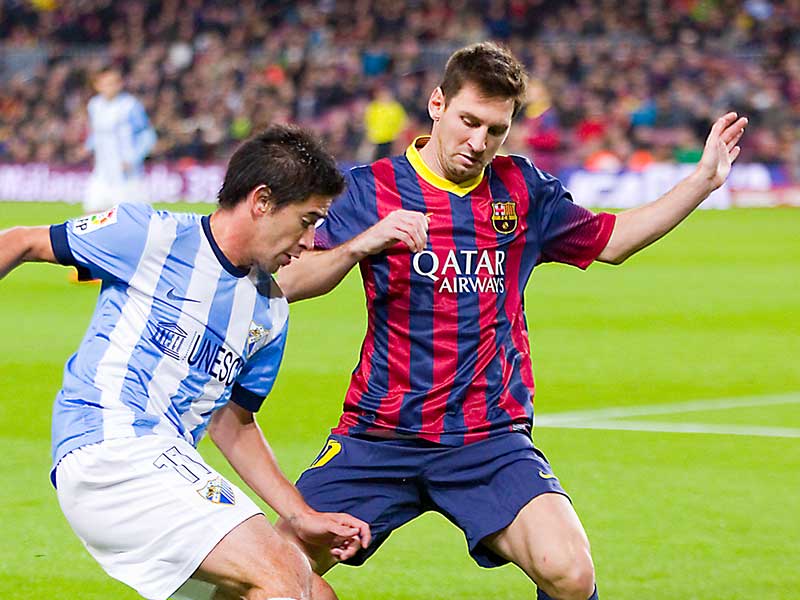 Why Doesn’t Messi Get Many Red Cards?

Messi doesn’t get many red cards because of his position on the field, style of play and character.

Position on the field

Messi is an offensive player, which means he spends most of his time attacking the opposition’s goal. Lionel has played either as a winger or a striker. Therefore, he is mostly attacking teams with the ball in his possession or the possession of his teammates. So there is no reason for Messi to make many fouls. It is usually other teams’ players fouling Messi and trying to stop him from scoring. Sides like Barcelona, Paris Saint-Germain and Argentina all like to dominate possession of the ball whichever team they face.

Messi’s style of play also helps him avoid many red cards or yellow cards. When the opposition has the ball, Messi is rarely pressing to recover the ball, which leads to fewer actions that could produce fouls. Also, he is well known for his lack of running when he is not close to the ball, which helps him conserve energy.

Even though Messi is playing as an attacker, other players in his position make far more red card and yellow card offenses. That is because Messi rarely loses temper. He is also famous for his introverted character. Because Messi is not complaining to the referees very often, he has fewer opportunities to get booked. All of this does not mean Messi never gets a yellow card.

How Many Yellow Cards Does Messi Have?

Lionel Messi’s red card record is incredible, considering the number of soccer matches he has played. But his disciplinary record overall has been great, too. That begs the question: How many yellow cards has Messi got?

Lionel Messi earned 90 yellow cards in his soccer career. This data is correct as of the end of January 2022. Consider that the Argentine has played more than 950 games for Barcelona, Paris Saint-Germain and the national team. That means he got a yellow card in less than 9,5 percent of all of his matches.

Messi has 81 yellow cards from his playing days at FC Barcelona. He also got one yellow card while playing for Paris Saint-Germain. Therefore, Messi doesn’t have many cards in the Argentina jersey – just eight yellow cards in over 150 games.

Messi vs Ronaldo – Who Has More Red And Yellow Cards?

But which one of these two players has a better yellow card record? Ronaldo has more yellow cards than Messi, as well. At the end of January 2022, Ronaldo had 137 yellow cards in his professional soccer career, 47 more than Lionel Messi.

Many soccer fans like to compare Messi and Ronaldo because of their incredible achievements on the soccer field. But their disciplinary records are different, with Messi being far more disciplined than his great rival Ronaldo.

Here are the overall statistics for Messi’s and Ronaldo’s bookings, as of February 1, 2022. 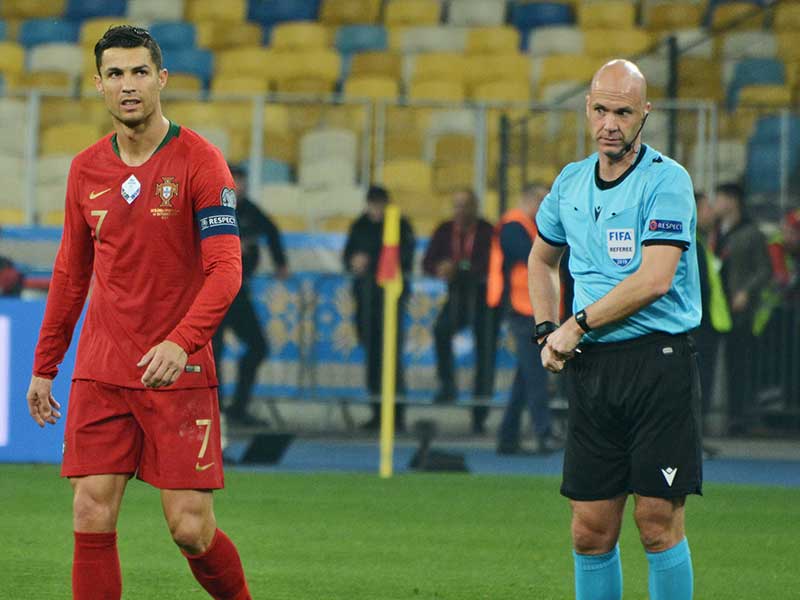 Who Has The Most Red Cards In History?

Lionel Messi has only 3 red cards in his soccer career. So who is on the other end of the spectrum?

Gerardo Bedoya has the most records in soccer history. He is a former Colombian soccer player who now works as an assistant coach. Bedoya got 45 red cards in his career, according to the BBC. Some media outlets named Bedoya ‘the world’s dirtiest soccer player’ because of his record. His nickname is ‘The Beast’, which helped his negative reputation.

During his soccer career lasting 20 years, Bedoya was sent off 45 times, playing for soccer clubs in Colombia, Argentina, Brazil and other South American teams. When he became an assistant coach, Bedoya was sent off in his first-ever game in the role, after just 21 minutes.

Quite different from what we had seen from Lionel Messi!