Whilst it is certainly not the most glamorous occupation on a soccer field, being a defender is crucial to any side’s tactical balance in any given game.

Anybody who has played soccer to any level will be all too aware of the importance of being able to defend effectively both individually and as a team, with the impact of a team’s defense often being hugely influential on the scoreline.

In summarizing the importance of defending in a soccer-playing context, legendary former US defender Christie Rampone once said:

‘If we score, we might win. If they never score, we can’t lose’.

That sentiment of the importance of defending is visible across all soccer-playing cultures, the world over and being able to defend requires effective communication, determined teamwork and tactical knowhow – in order to nullify any attacking threats, the opposition may have.

Over the past few decades, soccer has developed exponentially, with new managers and ideas coming into the game from all over the globe and attacking ideologies have been used to awesome effect.

However, defensive positioning and shape have remained just as important in the modern game as it has ever been and the tactical premise most teams use is consistent across the footballing world.

There are 5 main roles adopted by players in a standard soccer defensive team shape:

Playing in goal is certainly not for the faint-hearted.

In essence, a goalkeeper’s job is simple. They are tasked with stopping the opposing team from scoring a goal.

How a goalkeeper’s job differs from the rest of the team in a defensive setup is that goalkeepers can use any part of their body to stop the ball from going into the net.

Goalies are allowed to handle the ball inside their area (18-yard box) but can leave their area should they need to, where they too can only use their feet (like regular outfield players).

In the modern game, sweepers are having a big impact on how soccer teams are set up.

As the name suggests, the role of a sweeper is to sit a few yards deeper than the rest of the defensive line – to ‘sweep’ up any attacks coming their way.

Generally, sweepers rely on their anticipation and reading of the game, rather than their pace to defend effectively.

Being able to pass out from the back with precision is also a key component for any sweeper on the soccer field, particularly as the last line of defense.

Whilst most positions on a soccer field have developed and evolved over the generations, the role of a center-back has not changed.

Primarily, center backs are in the side to stop the opposition from scoring, by having a physical presence when looking to win the ball back from the other team and engaging in aerial duels.

Positioned directly in front of the goalkeeper on the field and behind the central midfielders, center backs have to be able to see the game unfold in front of them and snuff out danger at the first opportunity.

Communication between the center backs is also key, as some defensive partnerships may choose to man-mark the opposition, whilst some may opt to mark defensive zones – so having a good working relationship as a center back is essential.

Fullbacks are essential in any soccer defensive set up and the role of a fullback continues to evolve as developments in the modern game continue.

Primarily, the role of a fullback is to defend and both right and left fullbacks are tasked with stopping opposition wingers from getting past them and crossing balls into the box.

In addition to that primary function of a fullback, they must be able to cover a huge amount of ground and support any attacks that are building at the other end of the field.

Generally, fullbacks are some of the fittest players in the team – by virtue of the amount of ground they have to cover and their relationship with the center backs has to be on point to avoid the opposition being able to create attacking opportunities.

Much like fullbacks, wing backs are on the field to provide width for their team – in both an attacking and defensive context.

Wing backs play slightly further up the field than a conventional fullback and they are positioned to support the midfield in front of them for any attacking play.

However, as defenders wing backs are tasked with stopping opposition attacks from developing from further up the field and are required to tuck in and get stuck into their defensive duties.

Once again, the evolution of the positioning of a wing back continues to progress in the modern game and having good energy levels and being able to provide an attacking option is key for a wingback.

The way in which a team sets up to play a game can often have a huge bearing on the result and managers look to assemble the best possible formation to enable their side to have the best chance of winning any given game.

In a similar vein to the actual positions players take upon the field of play, formations are a broad tapestry and they too have evolved exponentially over the years, as new managers and ideas come along and look to put their own stamp on the game.

From a defensive perspective, having a tried and tested formation always helps teams have a plan to deal with opposition attacks, essential when looking to keep clean sheets.

Here is a rundown of some of the most common defensive soccer formations used by teams:

Seen as the archetypal ‘classic’ formation, 4-4-2 sets up two banks of four players – 4 in defense and 4 in midfield – with two attackers upfront.

The roles of the 4 defenders are: 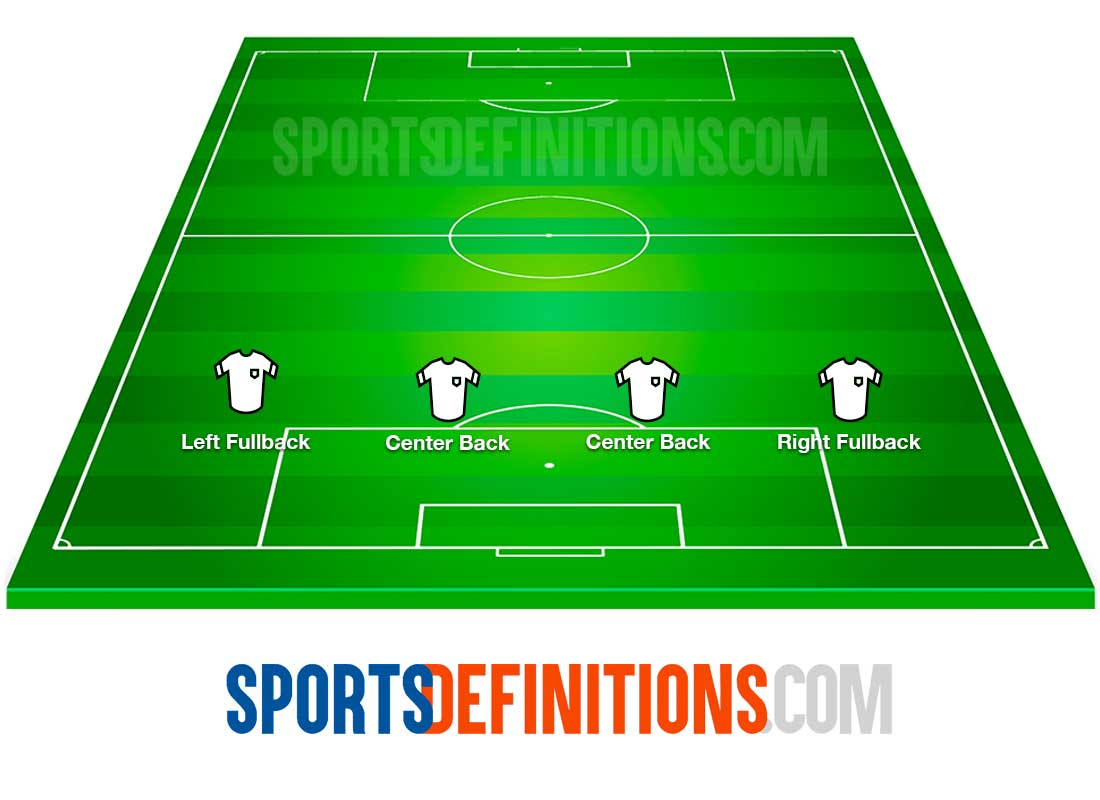 Having 4 players in the defensive line reduces the amount of space opposition attacks have to develop in, protecting the goalkeeper behind them.

The two center backs will often be kept busy by the forwards from the other team, with the right and left fullbacks tasked with creating width on the pitch and potentially supporting any developing attacks.

Utilized by British sides from the inception of the game, 4-4-2 was designed to stop opposition attacks from manifesting at source, with 4 midfielders tasked with helping out with the defensive efforts too.

However, as time has developed it has become the most tried and tested defensive soccer formation – used by sides across the game at all age groups and playing levels.

For sides looking to add some width and creativity to their play, adopting a 3-5-2 formation is often seen as the way to do it.

The roles of the 5 defenders are (reading across the pitch): 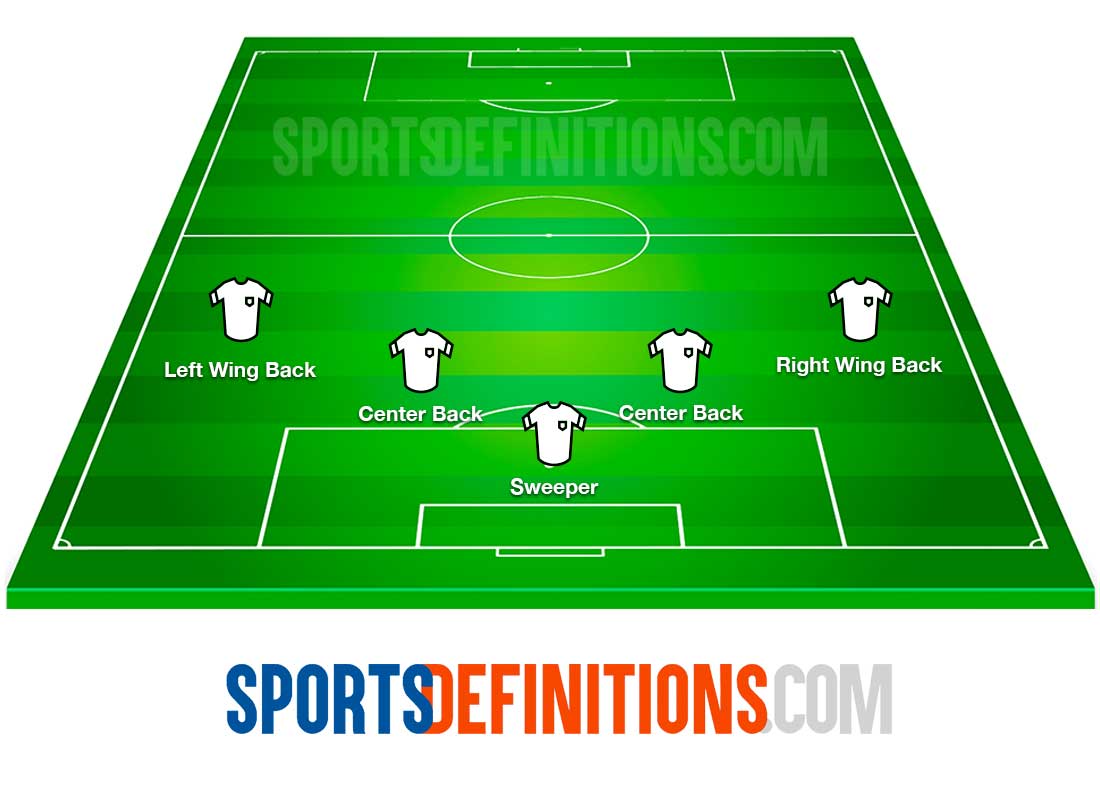 Factoring the goalkeeper behind this defensive line too, six of the eleven outfield players are defensively minded but the advantage of this formation is that it allows sides to build up possession and play the ball out from defense.

The sweeper will sit behind the two center backs to primarily stop any opposition attacks from becoming too dangerous but to also control the tempo of the game and pick passes when necessary.

In front of them, the two center backs will often engage directly with opposition attackers by looking to win the ball back at the earliest possible opportunity and allow their team to gain possession high up the pitch.

As mentioned, the role of wing backs is to provide width – both when defending, to stop opposition wingers and when attacking, to support any progressions up the pitch by their team.

A relatively modern formation, 3-5-2 is advantageous in its versatility and it allows teams to be balanced in both attack and defense, particularly in wide areas.

When looking to batten down the hatches and simply keep the opposition at bay, a 5-4-1 formation is often used by teams who are prioritizing defending,

The roles of the 5 defenders are: 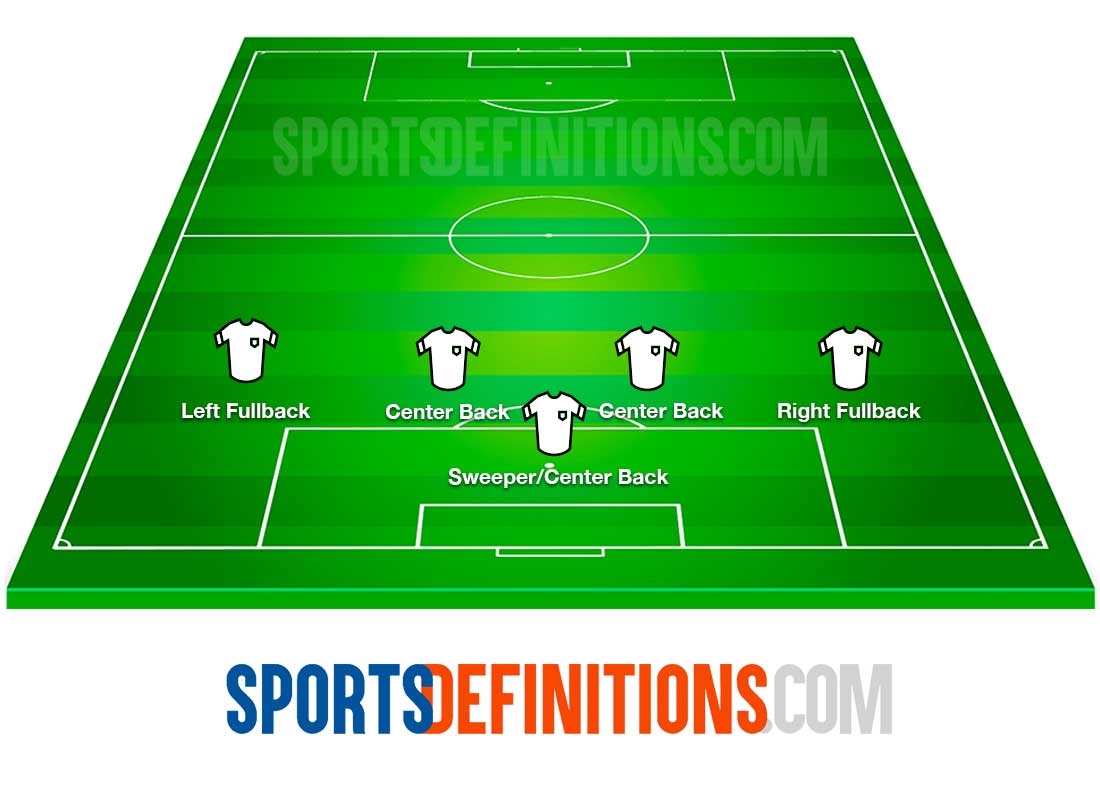 Whilst the setup of 5-4-1 is similar to that of 3-5-2, the key difference here is how close the defensive lines are together and how compact they are trying to be.

The Sweeper/Center Back role is versatile in this setup, depending on the situation of the game.

If a team is playing long balls into the box, a sweeper is more effective as they can mop up any loose balls from deep areas. However, if a side is playing the ball along the ground more, an additional center back will be employed to try and win the ball back higher up the field.

Once again, the other center backs are tasked with engaging with opposition attackers and using their physical presence to gain territory.

In this shape, the fullbacks aren’t looking to provide width, they are aiming to be as close to the center backs as possible, forcing opposition wingers to go round the outside and stopping them from getting into the box.

Adopting a 5-4-1 formation is often used by sides looking to play for a draw or it can be used by a manager when looking to protect an existing lead and if used effectively, it can be very difficult for opposition attacks to penetrate.

Whilst scoring goals will always be the ultimate aim in any soccer match, having an efficient and organized defensive strategy can often be the difference between winning and losing any game and the importance of defending in soccer and never be underestimated.