The rules of soccer include several which dictate what goalkeepers can and cannot do in a game. Here, we round up those rules and explain why they make the goalkeeper one of any soccer team’s most important members.

The goalkeeper is many ways the most important player on a soccer team. Required to be strong and agile, have quick reflexes, and yet also be a commanding presence within their own team’s penalty area when they are defending, they are often considered a breed apart from other players, simply because of their unique role, and the different rules which apply to how they can come into contact with the ball – which we will explain in this article.

While on the face of it, the answer to ‘what is a goalie’ in a soccer team is straightforward – to use any part of their body, and means possible within the game’s laws to stop their opponents from scoring a goal – and over many years the game has evolved massively to the extent where that role, and the soccer goalie rules, have greatly changed to go with them.

Because soccer teams mostly beat their opponents through being able to get possession of the ball, then keep it for as long as possible, passing it up the field, and in the process create chances to score goals, a goalkeeper has become far more than just someone who is very agile, who can use all parts of their body to prevent an opponent from getting the ball past them and into the goal. However, these attributes are still the foundation which many goalkeepers possess that allows them to develop into effective members of a team’s defense. Indeed, you might come across a goalkeeper being referred to as a team’s ‘last line of defense’, which is simply because, for the vast majority of a soccer game, they will be the player stationed furthest back on the field.

Perhaps the most obvious difference between the rules for a soccer goalkeeper and those for outfield players is that the former are the only members of a team who are allowed to handle the ball. But even then, there are circumstances in which it is considered illegal, and they will be penalized for doing so. 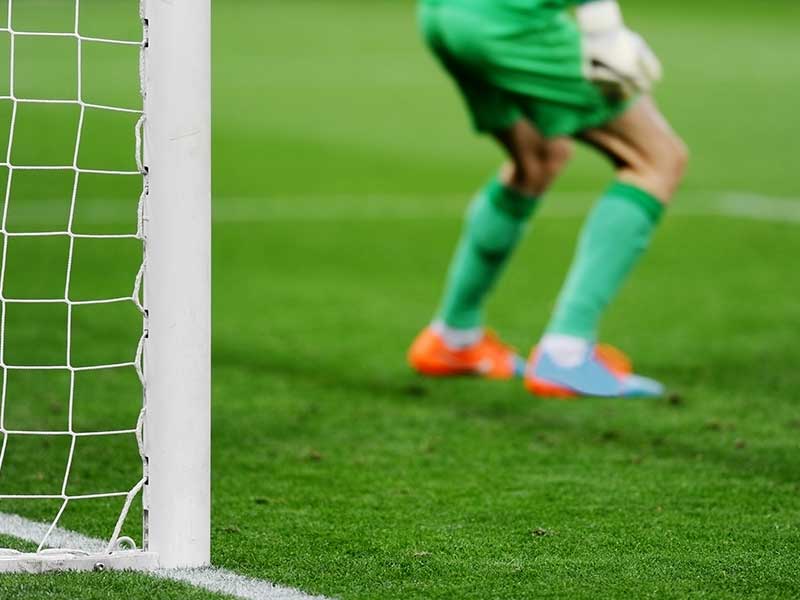 Are There Rules Governing What A Soccer Goalie Can Wear?

Because there are different soccer goalie rules for players in this position, each team’s goalkeeper is required to wear a different colored jersey from the other members of both teams. When the action is taking place in the penalty area, the referee needs to be able to distinguish the goalkeeper from the other players, so that they can see that they are the only ones who can parry or catch the ball with their hands.

In such situations, it’s important that the referee can spot them in a split second, so that, if they do catch, punch or parry the ball, they can know instantly that they are, indeed, the player who the rules allow to do this, and that they are not committing a foul in doing so.

Apart from the contrasting jersey, a goalkeeper is also allowed to wear a pair of specially-designed gloves, which will feature extra panels of a strong gripping material to help them catch and hold the ball when it is wet – as it often is when soccer is played during the colder months.

Otherwise, a goalie will usually wear the same soccer shorts, socks and boots with studs as their team-mates, although in winter because they do not move around the pitch like the other players, they are allowed to wear tracksuit bottoms or a pair or running tights under their shorts to help them keep their legs warm.

In What Parts Of The Pitch Can A Goalkeeper Handle The Ball?

A goalkeeper is only allowed to handle the ball while it is inside his or her own, that is, the defending team’s penalty area. While a goalkeeper is allowed to leave this area, they are like the other members of their team when they do so, in that once they are outside the penalty area, they can’t touch the ball with their hands or most of their arm – this is deemed a handball offense in the same way as it would be if it were committed by an outfield player. If it takes place outside the penalty area, this is punishable by the awarding of an indirect free kick to the attacking team.

So if a goalkeeper has the ball passed to them while outside their own penalty area, they must control and pass it using their head, chest, feet, or any other part of the body except the hand or arm. Handling the ball outside the penalty area is considered a serious offense, and can be punished by the goalkeeper being shown a red card. Usually, before handing out this ultimate punishment, however, the referee will consider whether the goalkeeper’s actions resulted in his opponents being denied a clear opportunity to score a goal.

Also, if a goalkeeper is deliberately passed the ball by a teammate, they cannot then handle the ball inside their own penalty area. This law modification – commonly called the back-pass rule, even though it may in some instances be passed sideways or forwards to the goalie – was introduced in the early-1990s and intended to discourage time-wasting, intended to prevent players of a team in a winning position in a match continually passing the ball back to their goalkeeper, and preventing the opponents getting the ball.

A second rectangular box, with its front line six yards in front of the goal, and 20 yards wide (10 yards on either side of the center of the goal) is also part of the penalty area. Sometimes, this area is referred to as the goalie box, six-yard box or goal area. This area is also considered a part of the penalty area, so a goalkeeper is free to come and catch, punch or kick the ball in this area. 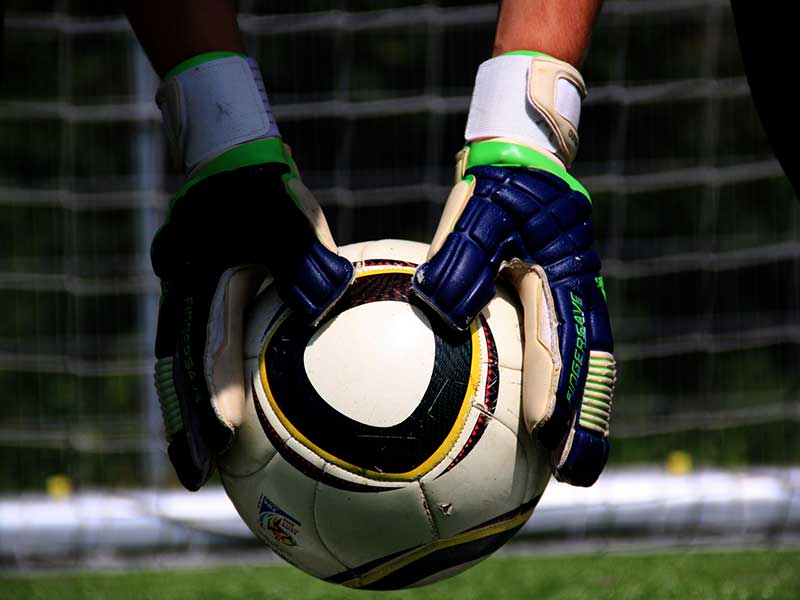 How Long Can A Goalkeeper Hold The Ball?

An additional measure introduced after the one described above, but with a similar objective, was a rule saying that when a goalie is deemed to have the ball in their hands for no more than six seconds before releasing it back into play – by either throwing or kicking it.

The six seconds only apply to time while the goalkeeper is holding the ball, and not to when they are bouncing or rolling it, or dribbling it with their feet.

In effect, a law on this – Law 12, Section 2 of the laws of football has replaced an older section, which used to stipulate that a goalkeeper could only take four steps, in any direction, while holding the ball. Now, the question a match official has to consider is ‘how long can a goalkeeper hold the ball?’.

The previous rule often led to the sight of opposing players standing very close to a goalkeeper, trying to restrict their view and their ability to kick or throw the ball accurately to a teammate. Because that seriously restricted the goalkeeper’s movement in his own penalty area, and his scope for effectively clearing the ball well down the field, the ‘four steps’ rule was superseded by what’s become commonly known as ‘the six-second rule’ in 1998.

In reality, the six seconds rule can be difficult for a referee to enforce, with so much else happening on the field, but it is in place to try to keep the game flowing.

What Are The Rules For A Goalkeeper Playing The Ball When It’s Passed Back To Them?

In regular play, a goalkeeper is allowed to handle or pick up the ball anywhere in their own penalty area, but, as described above, they can’t do this when it has been deliberately kicked to them by a team-mate, or thrown back to them at a throw-in.

In these situations, the goalkeeper is treated like any other outfield player, in that they cannot let the ball touch any part of their hand or arm. They are, however, allowed to control it with any other part of their body, and then kick or head it towards a teammate.

What Are The Penalties That Can Be Awarded Against A Goalkeeper For Breaking These Rules?

The usual penalty for a goalkeeper committing any of the offenses described earlier is the award of an indirect free-kick to the opposing team.

However, if a keeper fouls an opposing player, for example by pushing, tripping or holding them, the sanction available to the referee is the same as if the foul were committed by any other player – that is, the award of a penalty kick.

Other sanctions are available against the goalkeeper themselves, and again, these will depend on the referee’s perception of the seriousness of the offense. If a goalkeeper is deemed to have deliberately denied an opposing player a goal-scoring opportunity, they can be shown a red card – dismissed from the field and not allowed to take any further part in the game.

But the referee also has the discretion to award a caution (yellow card) to the goalkeeper if there is some doubt over whether their action actually prevented, or was intended to prevent, a clear goal-scoring opportunity. 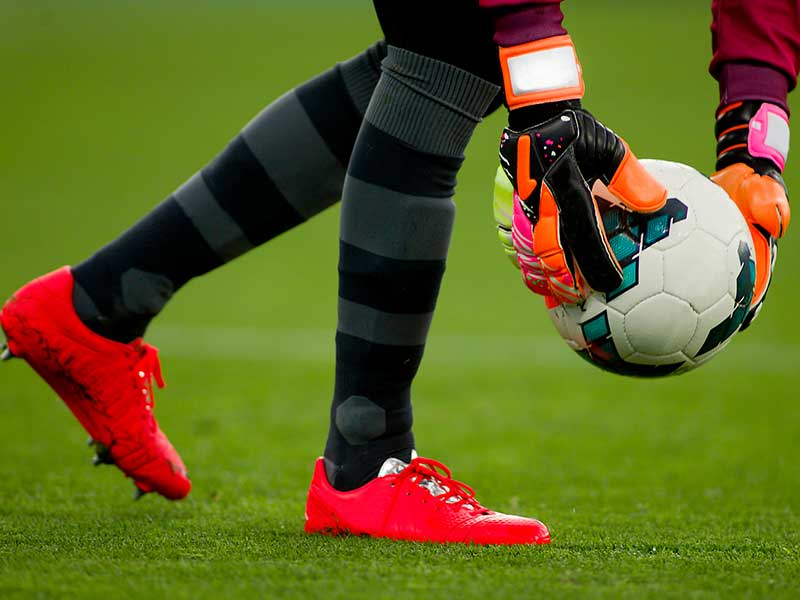 What Other Rules Does A Goalkeeper Need To Be Aware Of?

The goalkeeper does get quite a lot of protection from the rules of soccer, chiefly because there are many more ways in which they can play the ball than any outfield player, as well as because they are often targeted by more than one opposing player who will be trying them to stop reaching the ball, primarily in set-piece situations – that is, at throw-ins, free-kicks and corners.

However, goalkeepers have to bear in mind that they can be sanctioned in the same way as any other outfield player, if they are guilty of any of the following:

The penalties for any of these will be the same as if the offense was committed by any outfield player, so can include an indirect free kick, a direct free kick, or a penalty kick. The player themselves can be punished at the referee’s discretion with a verbal warning, a booking (yellow card), or, in the case of extremely serious offenses or persistent offending, a sending-off or red card.