A Guide to How to Play 8 Ball Pool

Pool is a very popular indoor game that has players and fans all over the world.

A large reason for this popularity is that it is played on a standard-sized table, the equipment needed for all the game’s variations is the same, and the methods of scoring are also easy enough to be picked up quickly by anyone.

Even if you’ve never played the game yourself, it’s very likely that you’ve found yourself in a bar or even a pool hall, and been caught up in the excitement of a game in progress, building towards an exciting finish as both players aim to beat their opponent by being the first to ‘pot’ all of their balls, then finish by sending the black, or 8-ball, into one of the pockets.

As it’s played on a smaller table than its more complicated cousin, snooker, and there are fewer colors of balls involved, pool is also a much easier game to follow and, usually, the action is quite a lot quicker too.

“Pool is a much easier game to follow than snooker and, usually, the action is quicker too”

In this article, we will explain the rules of pool, covering all phases of the game, the rules which apply to each phase of a pool game, and how the scoring system works.

For clarity, in this article we are referring to the version of pool often also referred to as ‘eight-ball’, by far the most common variant played around the world. Some people play a version with nine balls, but this is, by some margin, a minority.

The game of pool is overseen by the World Pool-Billiard Association (WPBA), which is responsible for ensuring that tournaments played around the world observe the rules of the game as it has laid them down.

But while it has a formal structure, pool is, at its heart, a very casual game, with a straightforward and generally easily-understood set of rules – one of the big reasons why it is so popular in so many countries. You can easily use a basic understanding of the rules to start and enjoy a game of pool wherever in the world you go.

What Do You Need For A Game Of Pool?

Firstly, pool is usually played between two people, although the rules of pool also allow it to be played as a ‘doubles’ game, with two teams of two, i.e. four participants.

A pool table has six pockets, one at each corner, and one each exactly in the middle of each longer side of the rectangular table on which the game is played. The standard table is approximately 9 feet (approximately 2.75 metres) long and 4.5 feet – or just under 1.4 metres – wide.

How To Rack Up Pool Balls

The game starts with the 15 multi-colored balls arranged in a triangle, as shown below: 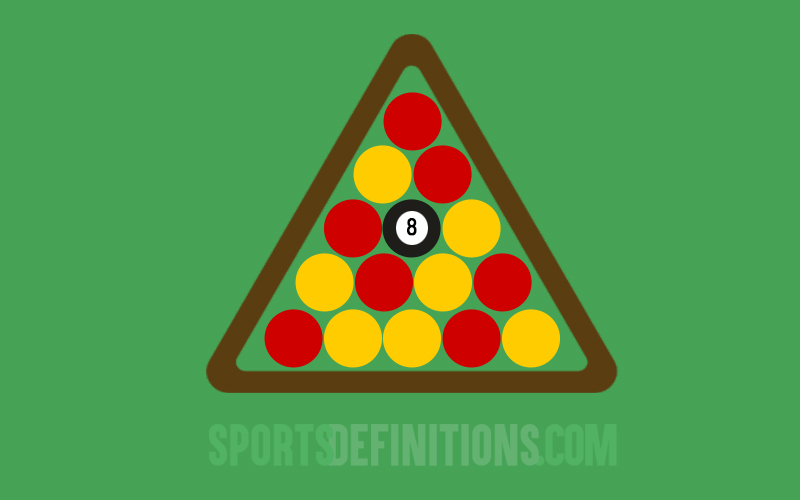 When racking the balls, you should place them in the middle of the two shorter sides of the table, with the apex ball of the rack (the 9 ball as seen here) on the foot spot on the table. You should try wherever possible to keep the line of the rear five balls parallel to the back cushion.

The object of the game is for each player to strike all of their own colored balls, one at a time, into any one of the pockets. Once a player has done this – ‘potted’ is the common term used to describe hitting a ball into a pocket – they then have to pot the black ball. Once they have done this, the game is over and the first player to pot all their own balls, followed by the black ball, is the winner.

Each completed session of play is called a frame. Matches can consist of a single frame, or of a pre-determined odd number of frames (best of 3, best of 5, etc), so that the one of the two players who wins the most frames is the winner.

The order of play is often decided before the start of a match by the toss of a coin, although the rules of pool do not specify how this should be determined.

However, the object of the game for each player is to pot all of the balls of the color or pattern established by that first ball to be potted, except for the black ball. This ball should be left until one of the players has potted all the balls of their own color/pattern, and should only be potted once one player has cleared all their other balls from the table.

Each time a player pots one of their own colored/patterned balls, they can take another shot and attempt to pot a further ball. A series of shots like this is known as a break, and a player who pots a series of their own balls continues until they fail to do so, before the other player then takes their turn.

What’s A Foul Shot In Pool?

Playing properly and well will not result in these happening very often, but in the event of a player making a foul shot, that is, a shot which is not deemed to be proper under the rules, their turn at the table ends, and they let their opponent resume play.

Under the rules of pool, the following instances constitute a foul shot:

The above list shows that it can be quite easy to fall foul of the rules of pool, especially if you aren’t careful when you move around the table, or if you use too much force when striking the cue ball with your cue – precision rather than speed is the watchword.

“Precision rather than speed is the watchword”

Other rules which aren’t so well known mainly concern the black or ‘8’ ball. You need to treat this ball with the utmost respect all the time that it is in play, because if you or your opponent pot it in the course of a frame, you or they instantly lose the frame.

Fouling the black ball, by hitting it when you are aiming for one of your own balls, is also a foul shot, as described above. If this doesn’t result in the black ball or any other ball being potted, the player committing the foul immediately surrenders their turn and their opponent goes to the table.

A more obscure rule comes into play if, in any shot, no ball is potted or hits a cushion. This is deemed to be a foul shot, because it is designed to ensure that the ball stay well spread around the table. It is intended to discourage players from deliberately ‘snookering’ their opponent, that is, putting the cue ball in a position on the table where the player making the shot cannot clearly see any of their own balls, due to them being obstructed by balls of the other color.

“Treat the black ball with the utmost respect”

Ways of Winning in Pool

A frame of pool is won when one player has potted all of their quota of either the colored or striped balls, and then finally pots the black, or 8-ball.

Or, as mentioned above, a player has to concede defeat if they pot the black ball at any time other than when they have cleared all of their own balls off the table.

In very rare (and unlucky) circumstances, a player can still lose a frame under the rules of pool after they have potted the black ball. This happens if the cue ball runs on after the black ball is potted, and itself goes into a pocket – what’s commonly known as an ‘in-off’.

The other way of instantly winning/losing a frame is if, during the course of one of your shots, you send the black ball off the table.

Variations on The Rules

While the rules of pool as outlined above are, by and large, standard to most countries in which the eight-ball game is standard, before starting play it’s always wise to ask whether any local variations apply.

The most common cause of any misunderstanding is over the custom for what happens after the 8-ball is potted accidentally. While, strictly, this means a player forfeits the game, in some regions (and indeed it can vary depending on the pub/club/bar in which you’re playing), in some instances, you’re allowed to simply retrieve the 8-ball from the pocket, replace it on its spot on the table, and carry on.

Another variation on the standard game of pool is known as ‘killer pool’. Don’t worry, it isn’t literally a fight to the death! Instead, in this game, each player starts with six lives (derived from the number of letters in the word ‘killer’ – easy, eh?).

The balls are set up for the start of the game in the same way as in a standard pool game, except that there’s no set pattern for how all the object balls are arranged within the triangle at the start, since it doesn’t matter which ball(s) you aim for and pot as you play.

Then, for each time you try to pot a ball but miss, you lose a life, and the turn passes to the next player. But if you pot a ball, you stay at the table and carry on, until finally one of your shots doesn’t result in a ball being potted.

If you lose all your six lives, you’re eliminated from the game, but if you aim for and pot the black ball, this earns you an extra life, so you can retrieve any lives lost by setting your sights on, and potting, this life-giving ball.

A foul shot is any of those as in the regular rules of pool – see the full list earlier. Another difference for Killer Pool over the regular game is that if the white ball leaves the table after someone has taken their shot, the next player can replace it anywhere on the table, so that they have the best possible chance of potting a ball with their next shot.

This can be a pretty quick game, which is one of the reasons for its popularity, but it can also be played by as many players as you like (or as many as can fit comfortably around the table).

Whichever variation on the rules of pool you choose to play, or apply to where you’re playing, the main objective should always be to have fun while you’re playing – and hopefully give other people some enjoyment in watching you show off your skills with a cue.

As we have shown, pool can be a very quick and exciting game, but it also has strong tactical elements, and it’s this mixture of attributes, along with the highly social aspect of playing with a group of friends which helps ensure its continued popularity.