There are five positions in basketball, each with their own specialities and placement on the court.

While basketball may seem a very fluid and fast-moving game, its nature – that players score points by throwing or putting the ball through a small hoop fixed at a height of 10 feet off the ground – means that every player has individual qualities and strengths which make them more suited to playing in certain positions on the court than others.

For instance, there are certain areas of the court in which speed and dexterity are the most important factors in being able to pass or dribble the ball around opponents. While naturally, the placement of the hoop gives taller than average players a distinct advantage in being able to leap easily to a height that allows them to put the ball through the hoop and score points with less effort.

So this article will explain what are the positions in basketball, and give an insight into the importance of each one to a team as a whole.

Are There Any Basketball Positions Which Are Essential In Every Team?

Just as in any other team sport, there are certain places on a basketball court in which most of the action is concentrated, and from where most of the chances for a team to gain an advantage arise.

And like lots of other sports, positions on a basketball court are divided into those with largely offensive, or attacking, responsibilities, and those whose job is mainly to defend their team’s end of the court.

Because of the shape of a basketball court, in answer to the question ‘what are the positions in basketball?’, five positions are considered to be the foundation of how a team sets itself up. From the back of the court to the front, these are as follows: 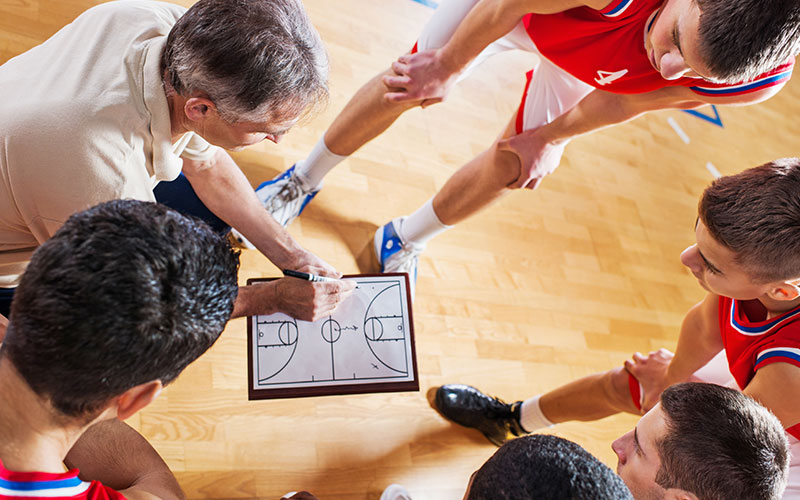 This is the player positioned furthest towards the back of the court on the team. Their main job is to receive the ball at the re-start of play, and move it up the court to feed their team’s more offensive players.

Because such players rely on speed and agility, point guards are often the smallest ones in a team. Also, because most of the action takes place in front of them, they often take on responsibility for on-field coaching and marshalling of their team-mates in response to their opponents’ tactics.

A point guard also needs a good knowledge of each of their team-mates’ strengths and weaknesses relative to those of their direct adversaries on the court. If he can exploit this knowledge successfully, he is likely to earn a far greater share of ball possession for his team, and be able to create far more scoring chances.

Often the speediest player on a team, this player will usually be the most skilled on the team at taking shots at the basket from long range.

Their purpose is to be able to run with the ball, often down either wing of the court, and be able to shoot accurately from distance. A particularly skilful shooting guard can earn their team a big advantage, through scoring three-point baskets from outside the key.

Being highly mobile and flexible are key strengths in this position, as they will enable a player to run and dribble around opponents who might often be much taller than them.

In addition, a really good shooting guard can play a vital defensive role, in being able to quickly cover the court and get back into defense to slow down or halt attacks by their opponent’s taller, but likely less mobile, opponents.

The jack-of-all-trades of a basketball team, the small forward is the essential link between defense and offense. They also require speed around the court, because one minute they might be mixing it among their opponents, trying to intercept the ball and slow down and disrupt their plays, and the next, they could be running forwards with the ball, looking to set up one of their offensive team-mates.

Like the guard, it’s also a big asset if they are accurate shooters from distance, as even if such shots aren’t successful, they can set up chances for forwards to score from rebounds.

Likely one of a team’s tallest players, they need a combination of strength, to be able to brush off opposing defenders, and skill. This will enable them to read the game and capitalize on opportunities to quickly nip in close to the basket and ‘mop up’ the ball when it comes loose after a missed shot.

How high up the court the power forward plays will depend on his team’s tactics, but an ability to score three-pointers will always be an asset.

Often the most recognized player due to them spending the most time at the heart of the action around the basket, the center will often also stand out due to being the tallest. As well as being tall, an effective center also needs to be agile, to be able to find the best position on the court to receive passes. They might also need to be able to respond to changes in an opposition’s defensive tactics.

While a center isn’t usually entrusted with a huge amount of defensive responsibility, it will benefit their team if they have the agility to deflect opponents, and can react quickly when the ball rebounds off the backboard or rim of the basket.

Who Decides Which Players Play In Which Positions In Basketball?

This is a central role of a team coach, who has to combine the ability to use the respective strengths of his individual players to the greatest effect, and the need to respond to any of a variety of tactics which are deployed by opponents.

Every coach will have a good understanding of his players, and will want to put them into the positions on the court where each one can use their strengths.

But as basketball is equally a defensive game, he also has to instil in his players the equal importance of being able to fulfil an important role with their backs to their own net, and when running towards that of their rivals.

As we have shown, players’ physique and individual qualities often mean they lend themselves to adopting a particular position. But in an ever-faster game, where players are all increasingly strong and agile, good knowledge and ability in a particular position is often secondary to their skills as an versatile all-rounder with a strong appreciation of the roles and responsibilities of not just their own, but every other member of their team.