In pretty much any sport which involves a player from one team throwing the ball towards an opponent, it’s become common practice for the thrower – who, depending on the game, could also be called a pitcher or a bowler – to rub the ball or be seen vigorously working it between their hands in some way.

So the question then arises: does this kind of action change the ball, or its flight, in any way? While in cricket, where the ball is bowled at an opposing batter in a way so that it bounces once before being hit, in baseball, the ball is not supposed to bounce.

This means that baseball pitchers, unlike bowlers in cricket, cannot gain any advantage through encouraging the ball to bounce up off the ground in an uneven or unexpected way – the pitch is a straight throw.

They therefore have to find other ways of deceiving their opponent – on rare occasions, this can be done by means of a knuckleball, but as this is a difficult skill, the most common means is rubbing the ball hard in an effort to very subtly alter its balance and wind resistance.

Why Are There Rules Governing Rubbing A Baseball?

The regulation of how a baseball is allowed to be thrown arose from a tragic incident during a game in 1919 between the Cleveland Indians and the Boston Red Sox. Red Sox pitcher Carl Mays pitched a ball in very poor light to batter Ray Chapman.

History doesn’t exactly document why Chapman missed the ball – but it hit him with such force that those on the field believed he’d got his bat to it. However, he didn’t and he died from his injuries. The incident was the catalyst for the introduction of the first laws forcing batters to wear helmets, and preventing pitchers from spitting on the ball.

So since they have not been allowed to use their own spit, pitchers have looked for other ways in which they can change the ball’s properties. 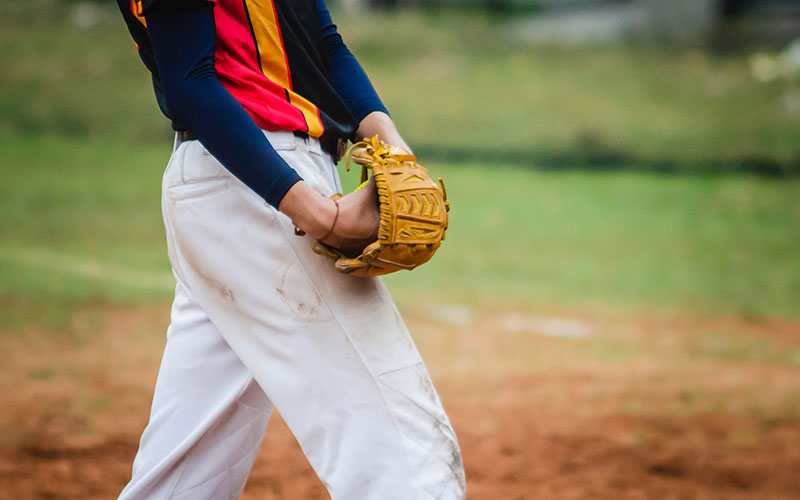 Why Did Players Start Rubbing The Baseball?

As there came to be a greater understanding of the physics of how a projectile is affected by the air through which it travels, baseball pitchers found that their biggest chance of deceiving an opponent was to make the ball stick to or slip out of their fingers unpredictably at the moment of release. This could marginally alter the weight or balance of the ball, and this would achieve the desired result of the batter failing to hit the ball, or not being able to control the hit in the way they intended.

But as the practice became more widespread, pitchers started to bring other substances onto the pitch and conceal it in their pockets so they could apply it to the ball at the required moment: incidents were reported of petroleum jelly, shampoo and shoe polish being used, as well as human saliva.

However, the Chapman incident described above led to baseball’s rules being modified to say that a pitcher must not “apply a foreign substance of any kind to the ball”.

So with the use of other agents completely banned, pitchers had to resort to manipulating it with their own hands by means of the heat and moisture this could generate.

With the use of any other substance out of the question, some pitchers began to find it difficult to control their delivery of a ball, especially when it was brand new.

So from the 1950s, every new baseball used in a senior competition has undergone a process called mudding. This involves rubbing it with dirty water taken from the Delaware River. It stops each ball from being too shiny and is designed to ensure that the pitcher always has a proper grip.

And although synthetic materials technology has made great strides since the mid-20th century, and the MLB officials have commissioned efforts to find a suitable substance for adding the right degree of grip to a new ball, nothing has been found to be as effective as a few splashes of muddy river water!

What Is The Right Way To Rub A Baseball?

The rules of baseball allow only one substance to be used to help pitchers grip the ball – rosin. This is the resin from pine trees and other conifers, and MLB rules state that: “The pitcher is allowed to rub the ball between his bare hands but cannot spit on the ball, his hands or his glove. Also, pitchers are not allowed to rub the ball on their clothes, glove or other body parts besides their hands, nor are they permitted to pitch with an attachment such as a bandage, tape or bracelet on either hand or wrist.”

That there are such tight rules governing what might seem to many to be a mostly harmless practice can be attributed to that single, tragic incident of more than a century ago. And the fact that there has not been a repeat shows why there are such tight controls over what pitchers are allowed to do to a ball before that dramatic shout from the referee of ‘play’.