A walk-off home run is one of the most dramatic ways in which a baseball game can end, and for the batter, will probably count as one of the highlights of his career, because it is a pretty rare occurrence.

It is much more valuable to a team than a regular home run, and in this article we will explain the circumstances in which a walk-off home run can be scored, and what makes it such a rare and valued achievement.

As you probably know, a baseball game consists of nine innings, with each inning divided into two halves, the top and bottom half, and each team can only score during their half of the inning. The ‘road’, away or visiting team gets the first chance to score in the top half of an inning, and the home team can score in the bottom half.

In each individual inning, the hitting team is allowed three outs before they have to switch over and defend – so a team can be out before their inning is completed.

A walk-off home is different from a regular home run in that it only occurs in the bottom half of the ninth inning – in other words, when both teams have reached their ninth inning, but the score is still even.

What Is A Home Run?

Most people will know of the concept of a home run, but for the purposes of this article, it’s useful to have an explanation of what it entails, and how it affects the score in a baseball game.

A home run is scored when an offensive team’s batter hits the ball hard and accurately enough for it to cross the outfield fence, evading all nine of the players of the team in defense stationed at various points around the outfield, and so allow him to run around all four bases before it is fielded by the opposing team.

When he hits a home run, a batter will score a run and a hit, as well as a Run Batted In (RBI) for each of his team-mates who scores.

Because hitting a home run entails the batter running through all four bases in the field, you might sometimes hear it  referred to as a ‘four-bagger’. 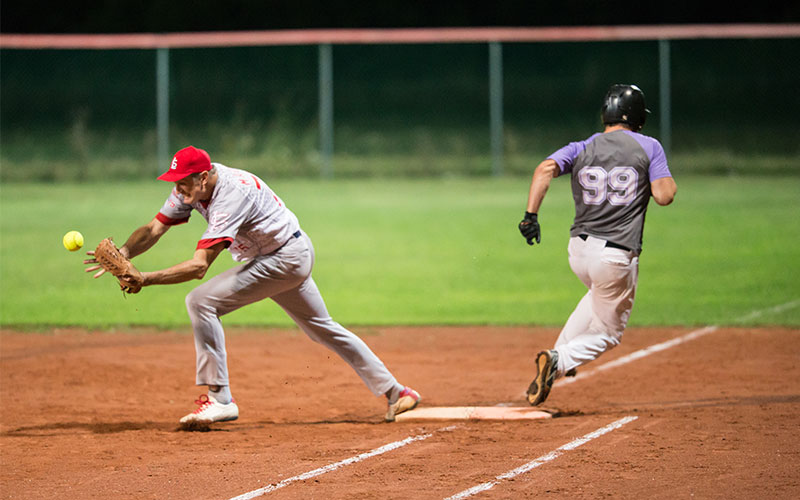 How Is A Walk-Off Home Run Different From A Regular Home Run?

A baseball game can often be very close, and may sometimes go all the way to the ninth inning before the outcome is decided.

By the time a game reaches this stage, the players in the outfield, and indeed the batters, are likely to be tired, having run around the field intensively for a couple of hours.

A walk-off home run differs from a regular home run in that it only occurs in the bottom half of the ninth inning, when both teams have reached their ninth inning, but the score is still even.

Do All The Runs Scored In A Walk-Off Home Run Still Count?

In the scenario of a match reaching the bottom of the ninth inning and the scores still being level, it could be that there are other runners on bases around the field.

So he still has to put in the yards if he is to get the credit for that dramatic final play shot in official statistics.

How Is Scoring A Walk-Off Home Run Different From The Usual Way A Baseball Game Ends?

The usual ending to a baseball game happens once the home team is ahead in the bottom, or final stages, of the ninth inning.

But this is only one of three ways a baseball game can end under the official MLB rules, the others being: when the visiting team is in front at the completion of the last inning, or when the home team scores a run which wins the game in the last inning.

A walk-off home run therefore represents a single hit which is made on the last chance a batter has to win the game, and is hard and well-placed enough to allow the batter to make it all the way back to home base.

So it’s the ultimate way in which a batter, under the pressure of facing one of the last balls of the game, can win it for his side. Given the extreme pressure which he will be under in simply facing the last ball, to score a walk-off home run is a remarkable achievement.

What’s The Biggest Baseball Game To Have Been Decided By A Walk-Off Home Run?

Incredibly, the World Series has twice been decided in this way. Back in 1960, Pittsburgh Pirates’ Bill Mazeroski was at bat in the ninth inning and scored a home run off pitcher Ralph Terry of the New York Yankees to decide the destiny of the game’s ultimate prize.

A similar achievement was made by Joe Carter, when he was batting for the Toronto Blue Jays during their sixth game against the Philadelphia Phillies. His walk-off home run earned the Blue Jays their second consecutive World Series title.