Baseball is a game that has been at the heart of American culture for generations. So much so that it has come to be known as ‘America’s National Pastime.’ While the origins of the game are contested for over a century, today’s rules are set and clear. In this post, we explain baseball rules to help you better understand the game. 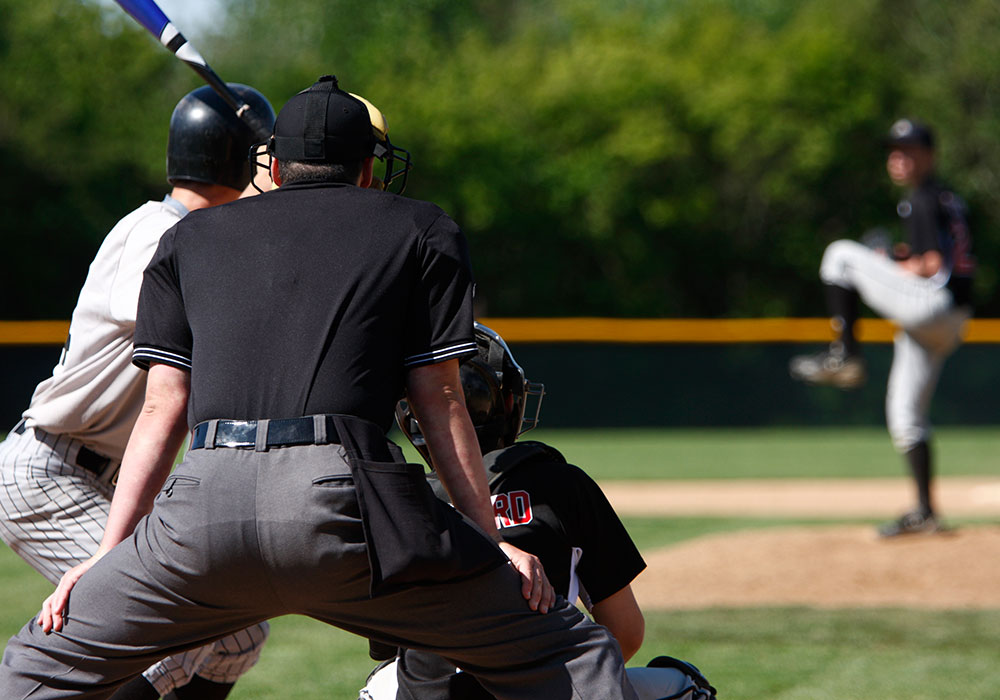 Objectives and rules of baseball

A game of baseball is played between two teams with nine players. A team’s objective is to score more runs than their opponent. To complete a run, the batter must run around four bases after hitting the ball, which has been thrown at them, as far as they can. Once a batter has made it around the four grounds before being tagged out, another batter will step in.

A baseball game lasts nine innings, and during this time, both teams will get to bat in each of these. Therefore, if the last team to bat in the ninth inning is already ahead in points, they don’t need to complete their batting as they will already have won the game. At the top inning, the away team bats, and at the bottom inning, the home team bats.

The batting order is set before the game, and it can’t be changed after. While substitutes are allowed, they must bat in the same order as the player they are replacing. When a pitcher throws the ball, the batter must attempt to get to at least first base if they have managed to hit it. They can try to run as many bases as they like before being tagged out, but they must touch each base with some part of their body as they pass it.

When a batter swings for a ball and misses it, this is called a strike. Batters are permitted up to three strikes before getting out, which means they are dismissed. In baseball, there is an area called the strike zone. If a ball lands here, a strike is also given. If a batter does not swing their bat and four balls miss the strike zone, they can walk to first base. Once at first base, they are then permitted to run to subsequent bases.

Other than a strikeout, there are a few more ways a player can be dismissed. Firstly, if they fail to make the base before the defensive player, which is called a ‘force out.’ Secondly, when the ball is hit in the air and does not bounce before being caught, this is a ‘fly out.’ Finally, when a batsman is tagged by a defensive player with the ball while both are running, which is called a ‘tag out.’

There are 27 outs in a baseball game. The offensive team will try to avoid outs while the defending team desires them. These are the most common ways a batter will make an out in baseball:

Below is a list of some of the most common ways that base runners can be put out:

The baseball field and equipment

A baseball field has two sections which are called infield and outfield, respectively. As the terms suggest, the infield is the area closest to the bases, and the outfield is the grass area beyond. There is a diamond shape with four bases, which are ninety feet apart, separating the two sections of the field. 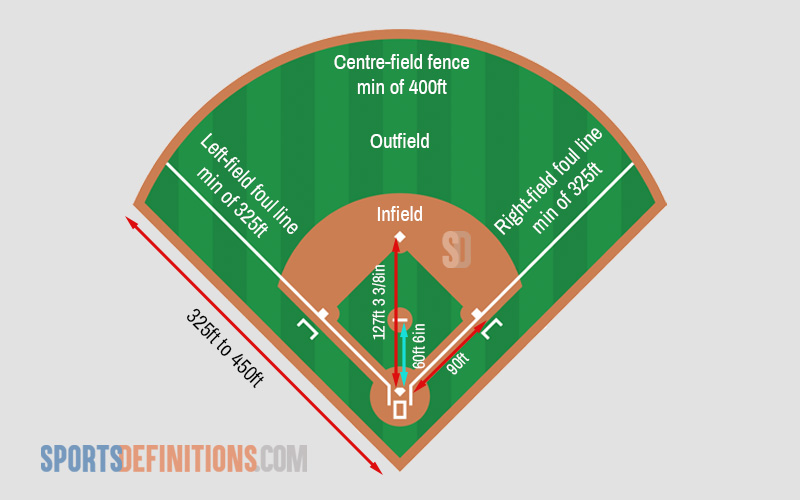 The pitching mound – where the pitcher must stand when they throw the ball to the batter – is located in the infield center. Then there is the home plate, where the batter stands. The three bases are known as first, second, and third.

Baseball bats are made of wood, metal, or aluminum. Baseball balls are approximately three inches in diameter, and they are white, with red stitching. The fielding team wears mitts to help them catch the ball or pick it up. These mitts look like oversized gloves. The catcher’s glove contains extra padding because it is their job to stand behind the batter and catch any missed balls. For safety reasons, the catcher also wears a helmet, a bodyguard, and leg guards.

Only two of the nine defensive players have set locations defined by the rules: the catcher and the pitcher. In theory, the other players on the team can be located virtually anywhere. These players will shift depending on the situation, the batter, and the pitcher’s style, but typical locations have become standard over time.

On the offensive team, players become ‘hitter‘ when it is their turn to bat. It is a hitter’s job to bat the pitcher’s ball and attempt to run all the bases to score a point. When a player on the offensive team is at a base, they can be considered a base runner.

How to score and win at baseball

The batter’s job is to bat the ball into the designated fielding area and then attempt to run around all four bases to score. They must make it around all the bases before the fielding team collected the ball and thrown it to the base the batter is running to. A mandatory point can be scored when a player hits a home run. For example, this usually happens when the ball has left the playing area and landed in the crowd.

If a player thinks they may not make it to the next base before being tagged out, they can stop at any base. If more than one player is already at one of the bases, multiple points can be scored from a single hit.

The phrase ‘the bases are loaded’ is often used when every base has a player. When a batter arrives at first base, the players already at the other bases can take the opportunity to trickle home. Each time they do this, they will be earning a point for their team. A maximum of four points can be scored on a single hit. The number of points scored is down to how many players make it home before being tagged out.

To win a baseball game, a team must score higher than their opponent during the nine innings that are played. The team with the most points at the end of all nine innings is the winner. If there is a tie, additional innings will be played until the game has a winner.

Do baseball rules ever change?

Baseball rules have evolved since the first set outlined in the 1846 Knickerbocker Rules. The National League Rules were established in 1877 and, since then, some significant changes and additions have occurred.

In the past few decades, there have only been a few changes in Major League Baseball. The first of these was in 2008, limited home run calls, fair or foul, were added. The second was in 2016, which asserted that slides on potential double plays would require those base runners to make a genuine attempt to reach and stay on base.

In 2020, Major League Baseball announced two changes. The first of these was the three-batter minimum. This requires the starting or relief pitcher to pitch a minimum of three batters until they are put out or reach base or until the offensive team is put out. The player roster limit was also increased, from twenty-five to twenty-six players.

How long does a baseball game usually last

How many baseballs are used in a game

What is a bullpen in baseball